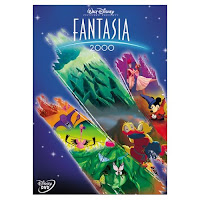 Lowdown: Classical music to the tune of computer animation.
Review:
Fantasia 2000 is a title packed with personal meaning. Roll the clock back 25 years, and Fantasia 2000 becomes the title of a monthly Israeli science fiction magazine that never got to be published more than 6 times a year; I didn't care, though, I just loved it. Fantasia 2000 is one of those cornerstone childhood memories I like to reminisce on.
This, of course, has nothing to do with Disney's Fantasia 2000. Unlike the magazine, Disney is not a company I like to reminisce on; Disney is actually a company that symbolizes a lot of bad things for me, not unlike McDoanld's. However, if I ignore that and focus on the film at hand, I have to say that the concept behind Fantasia 2000 (and the original Fantasia, too) is not bad at all: have some classical music tunes accompanies by animation.
The choice of classical tunes is as mainstream as one can pretty much get: The opening scene sets the expectations right with Beethoven's 5th. Not that there's anything wrong with that, but don't expect much in the way of originality. Some of the pieces are brutally shortened, too, while others are limited to just the famous movement.
The animation itself varies in quality. Beethoven's 5th is accompanied by rather surrealistic animation; other pieces are accompanied by animation that is probably aimed at kids - flying whales and flamingos messing around with yo-yos; and others feature the good old Disney milking cow characters of Micky Mouse and Donald Duck (the latter in a very schmaltzy interpretation of the Noah's ark story). Overall, when compared to the original Fantasia, the scripts are at the same mediocre quality but the computer animation lacks the hand made passion; it's all too sterile.
Things are being made worse by the cut scenes in between the musical bits. These feature famous celebrities of the cinema and music world saying supposedly funny yet stupid things about the upcoming gig. Again, this might work on a five year old, but given the subject matter I don't understand why Disney chose to ruin it for the more mature crowds that will probably view Fantasia 2000 just as much.
Best scene: By far the best gig is Gershwin's Rhapsody in Blue. Depicting a day on the life of recession era Manhattan, it is the only bit of Fantasia 2000 that is truly original and fascinating. And the music is not bad either! Some jazz definitely livens up the film.
Picture quality: Some digital compression artifacts are evident throughout (but especially in the more hectic scenes of the 5th), as well as the finishing touches (or rather, the lack of them) on some of the computer animation scenes.
Sound quality: It doesn't make you feel like you're in a concert hall, but I don't think Dolby Digital is capable of achieving that in the first place. The music is mixed to produce quite an immersive soundfield, and the result is very nice - I found myself reaching for the remote to raise the volume.
Overall: It has its ups and downs, but it's not too bad, and it's certainly something that ranks high as far as repeatable viewing is concerned. 3.5 stars.
Posted by Moshe Reuveni at 5/02/2007 05:21:00 pm
Email ThisBlogThis!Share to TwitterShare to FacebookShare to Pinterest
Labels: Film

Loved both Fantasias. Even though I saw them both a while ago, I still clearly remember how well-done Rhapsody in Blue was. My favorite piece of the film also. I really like when the commuters on the metro disembark and remain stuck together in one mass...

My problem with the original Fantasia is the sound quality. It sounds pretty bad, or bad enough to make me prefer to listen to the CD instead of enjoying the animation.
The music choices there are less catchy, which makes it more interesting, but also more boring. After all, I only like the more "noisy" classical music.