Film: My Family and Other Animals 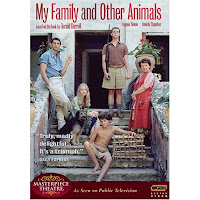 Lowdown: A family with lots of variations goes through an enchanting experience together.
Review:
There is not much for me to say about My Family and Other Animals. This rather unassuming British film (which seems as though it was made for TV) is, well, unassuming. As a story told from a child's point of view it is also very innocent; but I have to hand it: anyone that points at the fact we humans are just another animal gains a lot of favorable points with me.
So let me try and be more analytic with my approach to this review. My Family and Other Animals is all about a British family and what happens to it during a few years of living together abroad in a foreign yet lively country. As the film starts, the family is living in England. The family, in the film's case, consists of two older boys - one with art aspirations, the other with a love for shooting, a young girl, and a young boy whose only interest in life is animals and who happens to be the film's narrator (the book on which this film was based was written by the boy character). The core of the family is its mother, who holds everything together; there is no father and it is sort of implied that he is dead.
Anyway, the first minute of the film starts by reviewing just how unhappy the family is in England. Not that they're truly unhappy, it's just that they really suffer from the cold and the miserable weather and they really want to go and do stuff. And so, by the second minute of the film, the family finds itself in Corfu - a Greek island. From then on the story is all about what happens to the various members of the family as they grow acclimatized to the island, and it is all portrayed mainly by showing us the contrast between the different characters through some funny but not cruelly funny incidents; this is not Borat, this is innocent fun here.
Eventually, after lots of small and innocent adventures, the family has to go back to England as World War 2 is about to start - an inevitability we, the viewers, become aware of the minute we start hearing the occasional news updates throughout the film. Which sort of raises the question, if we know what the end is probably going to be like, what is the reason for making this film in the first place?
Well, that's a good question for which I do not pretend to have a good answer. For a start, the point of the film could be just to innocently entertain and make us laugh - and the film manages that very well, thank you very much, and with typical British panache. Then you can argue that the film is all about how essential and how central to us people is the institution that is the family; you can also argue the film is there to show us how a family of humans is not that different to a pack of animals. But most of all I would say the film is a nice portrait of how a kid, busy growing up without really considering his family as the center of his existence views a world in which his family is the center of his existence and how he - as well as everyone else in his family - matures through the unusual experience at Corfu. As I always say, not much can rival travel and exploration as far as opening one's eyes is concerned.
Best scene: The shy mother who never tries anything and always lets her kids do the messing around, tries - for the first time - to get into the sea and bathe. Despite the simplicity of the task on paper she fails miserably while emphasizing her importance as the element that holds the family together on the way.
Overall: Don't expect too much and you'll enjoy an hour and a half of innocent fun. 3.5 stars.
Posted by Moshe Reuveni at 4/13/2007 10:34:00 pm
Email ThisBlogThis!Share to TwitterShare to FacebookShare to Pinterest
Labels: Film