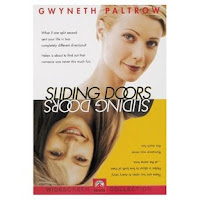 Lowdown: Things as slight as a sliding door can completely change the course of a life.
Review:
Sliding Doors is a film I first encountered through stories from a work colleague who claimed the film has changed her perception of life. Since those high expectations were set I got to watch it twice, but never under favorable circumstances as far as critical viewing is concerned. The DVD offered a good opportunity to give the film a proper break, although I never expected my life to be changed from this chicks' flick.
The premises behind Sliding Doors is very simple. It starts by following the life of Gwyneth Paltrow, a London PR agent who has just been unjustifiably sacked, as she takes the tube home. Movie magic hits Paltrow as she runs towards her train causing the film splits in two: one half follows what takes place when Paltrow misses the train, the other when she catches it. In one half Paltrow goes back home to find her boyfriend cheating on her, on the other she misses out on the cheating. As of that key point, her life rolls along the same way in the sense that Paltrow is the same Paltrow on both halves, but the effect of that turnkey event - catching the train and then catching the boyfriend - makes a whole of a lot of a difference. On one hand we get a Paltrow that's independent and flourishing as she meets a new boyfriend, and on the other we get a seemingly failed version of a Paltrow that has to work two hard working jobs a day to keep herself and her cheating boyfriend afloat. And so the two halves transpire simultaneously, showing us how a very dismissable event can have such a significant effect on one's life. And luckily for the film, this idea works and works well!
The key element that makes Sliding Doors work is its simplicity. The story is simple: there's no magic, there are no aliens involved, the time-line is rather short, and the number of characters is pretty limited. For a film revolving around relationships there are very few characters around; things come down to (a) old boyfriend and (b) new boyfriend. No family is ever mentioned.
All this simplicity helps the core ideas behind the film to float: the idea that events we might dismiss can have significant impact on us - what most people dismiss as luck; the idea that we are who we are and that often this "luck" is the result of our own doing; the idea that what we call a failure and what we call a success story could be the results of events beyond our control, therefore requiring us to change our definitions of success and failure; and also the unpopular idea that bad things can happen to good people when they least expect it just like that - out of the blue - because that's the fragile nature of life. Plus a few good things about relationships and how they should really be like.
If Jane Austen was to live today, Sliding Doors might have been one of her creations.
Best scene: I really like the scene in which Paltrow misses / catches the train, which is the scene in which the main concept behind the film is presented - the split personalities start there. What I like about it is the simple means used in order to convince us, the audience, that Paltrow has split in two: all it takes is some very simple "special effects" and a bit of a mystical sound, and that's it. Nothing flashy, no CGI, no major dramas - and it works, and through this simple cinematic magic we immediately accept what follows afterwards. Brilliant film making.
Picture quality: Pretty awful. Simply a bad transfer, probably from an inferior source.
Sound quality: Basic. Surrounds are rarely used if ever, and almost everything other than the music is locked to the center channel. This film has low budget written all over it.
Overall: For a film this short and this simple Sliding Doors packs a mean punch. 4.5 stars.
Posted by Moshe Reuveni at 4/05/2007 11:24:00 pm
Email ThisBlogThis!Share to TwitterShare to FacebookShare to Pinterest
Labels: Film