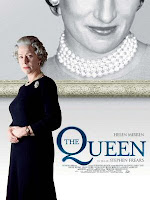 Lowdown: A tribute to pragmatism.
Review:
What is common to both Queen Elizabeth and Osama Bin Laden? Easy: Both are supporters of the Arsenal football club. Of the two, Osama is actually the one known to take famous participation, forcing an official denouncement from the club after the events of September 11. All in all, that's a good way for me to say that I doubt this review of the film "The Queen" will include much about the film; it's rather going to be more of an opportunity for me to express what I think of the constitution.
What do I think of the monarchy? Let's just say that I don't approve much of arguments by authority or tradition. Not that there's anything wrong with those if they happen to be good for reasons that make sense as well; but, for example, tradition for tradition's sake, as in the case of the British monarchy, is not my cup of water. I definitely have a problem with my Australian passport saying something like "the queen asks that I'd be taken care of" on it's front page; I don't know the queen, I don't recall ever electing her to act on my behalf, she's half a world away, and frankly - I don't see much of a reason to have an official head of state in the first place. We have enough politicians as it is that we can't get rid of, we definitely don't need ones that are born into the role and can't be kicked out of it.
With that in mind, let's discuss the film for a while. The Queen focuses on the events of a very short period of time: the few days following the death of Princess Diana, and what took place within the royal family, the British government (represented by the then newly elected Tony Blair), and the British public (represented mainly through TV clips). What we end up having is a clash between the old, represented through the comic relief like Phillip (the queen's husband) and Prince Charles, and the new - represented through Tony Blair with his promises for revolutions in the UK, and his wife Cherie whose opinions on the monarchy seem to be similar to mine. In between all this mess is the queen herself, who has to face a situation where all of a sudden her people seem to think of the monarchy as something to get rid of just because of the way the establishment has reacted to Diana's death.
You may as well argue that the main point of the film is to expose the queen as what she really is - yet another person - just through her handling of this tricky situation. At first the queen doesn't realize what's going on with the British people's state of mind. I have to admit I'm with her on this one: I don't understand why there was such a fuss about the death of Diana; as tragic and sad as it might have been, every day many good a people die, and many of them have contributed much more to society than Diana has. Not that there is a scale where you can say who was better, but that's exactly my point - the reaction to Diana's death epitomized the problems in today's society which seems to be in need of a glamorous mentor, regardless of his/her true skills.
In the film it falls upon the shoulders of Tony Blair to settle things right and to set the path of the queen the right way. That is, the way of the pragmatist: succumbing to the will of the people to give them exactly what they want while nurturing the monarchy even if there's no particular reason for doing so. However, as much as the film tries to make Blair sound convincing, I'm still with his wife on this one. I also think that as great as the film attempts to make Blair, the guy will mostly be remembered in the pages of history as the one who went along with George Bush to very wrongly invade Iraq. And for the record, I like Blair; I would have voted for him if I was a Briton and I would very much like to see someone like him in Australia, albeit with less religion oriented policies.
All in all, The Queen is an entertaining drama with solid performances. It definitely holds its own, and although I was spotted yawning a few times in the middle it cannot be said to be boring. It's not an action film and there are no sex scenes, but there is some comedy and the issue at hand is fairly interesting.
Where I do have criticism is to do with the way the film tires to force a certain image upon its viewers. For example, attempts to portray the monarchy as old fashioned go beyond the ludicrous, with the film giving Buckingham Palace old style dial phones and TV sets dating back to the early eighties. Given that the film’s events took place only 10 years ago this is plain silly; the palace would not be able to make outgoing calls, for a start. It's a shame, because this silly attitude is in the way of the fine display of acting and the proper character development the film sports.
Best scene: Cherie meets the queen for the first time, disobeying the "rules of conduct". She behaved exactly the way I would have, I think: respect the person, disrespect the institution.
Picture quality: There's some graininess throughout, and flesh tones are inconsistent and unrealistic.
Sound quality: Not much in the surrounds. Dialog is often badly recorded with evident hisses.
Overall: A solid 3 stars.
Posted by Moshe Reuveni at 4/29/2007 10:27:00 pm
Email ThisBlogThis!Share to TwitterShare to FacebookShare to Pinterest
Labels: Film