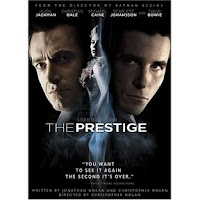 Lowdown: A magicians' fight for who can give a better show as an analogy to reality vs. perception.
Review:
The team that gave us Batman Begins is back with a vengeance in The Prestige: Director Christopher Nolan, Christian Bale and Michael Caine. It seems like they all got a follow-up contract, and joining them this time is Hugh Jackman, an actor I'm only familiar with through the X-Men series which I detest. However, being that Jackman is an Australian he has to be good. Sarcasm aside, though, with such a team and such a record you have to have high expectations of The Prestige; sadly, I have to say I was disappointed.
The Prestige is all about a rivalry between two magicians - Bale and Jackman. They started out as a team, but when a fatal error causes Jackman's wife to die on stage it's an all out war between the two. Both are truly devoted to being showmen magicians and are willing to sacrifice it all for their shows, and both of them indeed sacrifice it all during the film. Eventually Bale comes up with a trick that Jackman cannot match, and so Jackman ends up pursuing a scientist called Tesla in the USA. Tesla, portrayed with much intrigue by David Bowie, is actually a real life character - the unit for measuring magnetic flux density is named after him, and amongst his achievements is us using AC currents to run the PC's on which screens you're reading this now. Jackman comes back from Tesla with the jackpot - a trick no one has ever done before (and to be frank, until the days of Captain Kirk arrive no one ever will, either) - and thus a showdown between the two is held. This time, though, it's personal.
There is a lot of potential in The Prestige, with the issue of what it is that really matters - what you really are or what others perceive of you - at its core. But while it deals with such an interesting and potentially provocative issue, it cannot be said to be dealing with it well.
For a start, I found the film to be far from engaging. Sure, you want to know what's going on, but the film is closer to being described as a boring film than an intriguing / thrilling one. Engagement is not helped by the ever changing time lines: The Prestige starts from the end, at a point where Bale is charged with the murder of Jackman, then jumps back to their beginning and moves back ahead while jumping from time to time back and forth. It's not that this is confusing, but it detracts from the engagement.
Add to that an overuse of a hand held camera. It's not to the level of being puke inducing, but I do prefer smooth camera work that doesn't attract too much attention to itself as it jolts along.
And then there's the catch at the end. Everything builds up towards it, the great surprise that's supposed to shock you as you discover just how far the magicians at hand - Bale and Jackman - are willing to go for their image. But alas, even I with my gullibility and mediocre intellect was able to foresee the catch somewhere during the middle of the film. Sure, I still wanted to know whether what I expected is going to happen, but I wasn't really surprised. In fact, I'm surprised that given what takes place in the film the characters themselves couldn't see the outcome midway, because every person who is not blind would have seen it if he/she was there instead of Jackman. What I'm saying here is that the script has some significant weak spots.
Ultimately, the promising discussion that is the premises of The Prestige feels like a hit or miss affair that has missed. The discussion is rather muffled and unfocused, and all the good acting at hand does not help save the day.
Best scene: Bale and Jackman, still friends, see just how far an old Chinese magician is willing to go for his own show. The guy presents himself to be weak and frail, but in reality he has to be as strong as an ox to be able to perform his tricks. This scene becomes the pivot of the film, as it shows how a person can twist his entire life just in order to be able to get away with his show.
Picture quality: Exemplary. I haven't seen such a good picture - detailed, noise free - on a DVD for a long while.
Sound quality: On some special effects heavy moments it's aggressive and very good, but most of the time it's average Hollywood quality - good, but it can be better.
Overall: A promise that fails to deliver. 2.5 stars.
Posted by Moshe Reuveni at 4/06/2007 10:11:00 pm
Email ThisBlogThis!Share to TwitterShare to FacebookShare to Pinterest
Labels: Film

Well, I disagree with you, but that's no surprise.
It's funny that while you thought the film bordered on boring, I found it extremely engaging, which wasn't what I expected at all. I also felt it had a steady build until the end, and even though I also figured out the "big surprise" before it was revealed, I didn't feel as though I lost the effect of the ending climax.

I have to say that given your company's admiration for the film I was surprised at how much it failed to connect with me. And I wasn't alone: Jo found it as disengaging as I did.
One of the thing that really ruined me was [spoiler alert!] Jackman's inability to see that Bale's partner was Bale's "twin" when he had him kidnapped and even buried. I mean, how many people would have the same lost fingers on their hands?
At least I'm happy knowing others didn't find it to be as much of a waste of time as I did. Not that's it's bad; I just thought it's fairly ordinary.