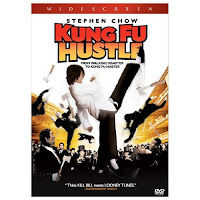 Lowdown: Everybody was kong fu fighting.
Review:
I first heard of Stephen Chow through Shaolin Soccer, a comedy which - how shall I put it? Portrayed football in a very weird way and wasn't funny at all, at least not in my book. Kong Fu Hustle, however, has received rave reviews; enough to get me to rent the DVD.
The story is rather confusing. Kong Fu Hustle takes place in a generic Chinese city, and is set in the past (how far past is rather unclear). The city is ruled by a gang of vicious criminals called the Axe Gang; however, this gang is not powerful enough to enter the city slums. A couple of make believe gangsters who want to join the Axe Gang decide to cause trouble in the slums in order to pass the gang's initiation, but their plan fails and instead they reveal several kong fu masters from within the slums that kick Axe Gang ass. From there on the story continues unfolding in a rather convoluted kind of a way, exposing masters and villains, creating heroes, and ending up with the boy getting the girl. Of course.
From the word go Kong Fu Hustle feels weird. The look of it is inconsistent; the sets and everything else don't look real, and you sort of wonder whether it's a bad DVD or whether it's intentional.
It's not just the look that's inconsistent, it's the plot as well; it moves all over the place, with characters changing character all the time. the Axe Gang starts as a really vicious and cruel company at the opening scene where they kill someone and his girlfriend in cold blood, but from then on they're nothing but the comic relief. The character that turns out to be the film's hero, identifiable at first only because you identify Stephen Chow, starts off as a character that's as interesting as last week's paper and only begins receiving the film's attention somewhere towards the middle.
So plot and direction are not the film's main attributes. What are they, though? Well, they are in the action and in the weird - may I say unconventional - way in which things take place. More than anything, the film feels and behaves like a cartoon. A loony tunes cartoon, if pointing a finger is required: You get weird and grotesque characters, just like the cartoons feature, developed just like they do in the cartoons and behaving just like they do in a cartoon. The lack of focus, the surreal atmosphere - they all contribute to the cartoony feel. And yes, the action - lots of kong fu - is heavily exaggerated, cartoon style; it doesn't take much to realize there is not even the slightest attempt to make the fights look authentic. It's all just crazy, but in a nice way.
Kong Fu Hustle also pays homage to many films (and cartoons). There's a scene that's just like Kill Bill (check the DVD cover to see which scene), but there are also Batman and Spiderman references, to name a few.
Best scene: The Road Runner homage, in the shape of a classic Wile E Coyote like chase, is my pick of the lot.
Picture quality: You can't say whether it's intentional or not, but colors are all over the place. Other than that the picture is ok, if a bit lacking in detail.
Sound quality: Effects hit you left and right, with aggressive use of the surrounds (although low frequency effects are somewhat lacking). However, and I can't believe I'm saying that, it's a case of quantity vs. quality here: sound effects are compressed and of a low fidelity overall; they're just there, having a go at you, instead of making you feel like you're a part of the action. My ears protested after watching this DVD.
Note the default soundtrack on this DVD features some very shifty English dubbing. Do yourself a favor and watch the original Chinese soundtrack instead.
Overall: Weird and inconsistent, yet cheerful, somewhat funny, and original (especially for a film of the martial arts genre). Overall I'll go for a middle of the road score - 2.5 stars.
Posted by Moshe Reuveni at 4/11/2007 09:43:00 pm
Email ThisBlogThis!Share to TwitterShare to FacebookShare to Pinterest
Labels: Film