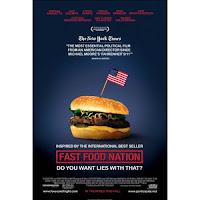 Lowdown: All about the politics of the food we eat.
Review:
A few years ago, Super Size Me has changed my life. I knew fast food wasn't the best thing for me, but I didn't realize just how bad it was. It's not like I really found the film to be good; it was mostly the DVD's supplementals, especially the bit where they let hand made burgers and hand made chips rot in comparison to McDonald burgers in chips, that made me realize that I should put an end to eating chemicals that make me feel bad afterwards. And indeed, since watching that film we've only been eating at the really fast food joints on emergencies where we're stuck in the middle of nowhere with nothing to eat.
All this introduction was in order to say that I was looking forward to Fast Food Nation, expecting it to be a more thorough discussion on things that by now I did some investigating about on my own. I wasn't disappointed as far as the level of discussion was concerned.
Fast Food Nation aims at being a regular film, as opposed to a documentary, that exposes its truths about the realities of fast food through the happenings of a collection of characters whose lives touch fast food in one way or another. We have ourselves a marketing specialist who moved from CNN to a fast food company, a teenager who works at a fast food place to support herself, a group of illegal Mexican immigrants who work at a meat processing plant, a rancher who used to compete with the big meat processors, and many many more. Some of these roles are portrayed by veteran actors, but here's the thing that makes me avoid mentioning any names: given the large numbers of characters and the relative distance between the various subplots - whose only common ground is their involvement with the fast food industry - there is no real lead role in Fast Food Nation. Everyone is a supporting actor.
And that's the main catch of the film and its biggest downfall: by wanting to cover as many aspects of the fast food industry - slave labor, evil working conditions, ill treatment of the cows, chemical makeup of the food, the marketing behind it all, the politics (to name a few) - and by wanting to do it all through a plot driven film with characters as opposed to a doco, the film reaches for the sun but falls significantly too short. Don't get me wrong - I do agree with pretty much everything the film has to say about the fast food industry; in fact, the film goes way beyond the fast food industry, criticizing the American lifestyle as a whole - parenting and schooling, to point at something out of the top of my head. It pretty much uses the fast food industry as a pivot for criticizing the capitalists' way of life. But alas, as much as I agree with it, a film is a film and it needs certain ingredients to work or it need to be truly brilliantly original; Fast Food Nation is not truly brilliant, and it fails in being rather too uninvolving by aiming at too large a number of targets.
Best scene: There can be no doubt about it: the scenes from the killing section of the slaughter house, with which the film ends, will stay with the viewer for a long time. Especially every time they have a piece of meat. Indulgences include the killing of cows, their skinning, and then the basic separation of the body parts.
I can see it coming: "Aww... I'm not watching that". Well, I can't force you to watch it, but I will say this - if you choose to eat meat (and I do), it is your duty to see what is done in your name. Do not make yourself like an ex Nazi and say "I didn't know such thing were going on in my backyard, I thought all the Jews were just going for a school trip". Watch the film.
Picture quality: Despicable. For a modern film to have such a shit looking picture (and excuse the language, the picture is one big piece of shit) is inexcusable.
Sound quality: I couldn't believe it, but it's true. The Fast Food Nation DVD I have rented and reviewed here features a stereo soundtrack only (as opposed to 5.1), and a very low quality one at that, too. Allow me to point a finger and say that it seems as if Australian viewers were severely shortchanged with this DVD.
Overall: Important viewing that would hopefully get you to think, but not a particularly good film. I have to balance the score somewhere in the middle, so I'll go with 2.5 stars.
Posted by Moshe Reuveni at 4/08/2007 09:33:00 pm
Email ThisBlogThis!Share to TwitterShare to FacebookShare to Pinterest
Labels: Film