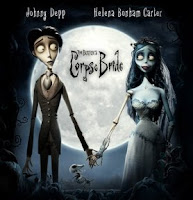 Lowdown: Death can be much more interesting than life.
Review:
Corpse Bride is one film that I reluctantly rented just because I got it for free. Sure, Tim Burton's films are good, but they're also pretty eccentric - eccentric enough to never really get me enthusiastic about watching them until after I watch them. That, and the fact I didn't like The Nightmare Before Christmas, meant my expectations out of Corpse Bride were low. And sure enough, as with most things you don't expect much of, I was pleasantly surprised.
The main thing about Corpse Bride is its visuals - made entirely of stop go animation (I have to take someone's word for the stop go entirely thing, but there's no doubt the result is magnificent). That, and its imaginative nature: there's more imagination and vision in Corpse Bride than ten regular run of the mill contemporary animation films - you know, the Madagascar & Shark's Tale production line.
The story is set in Victorian times and follows Victor, the clumsy son of a nouveau riche couple. His parents arrange for him to marry Victoria, the daughter of aristocrats who lost their money and need the marriage to maintain the financials of their elevated status. Up until a day before the wedding Victor hasn't met Victoria; but meet they do, and with the aid of a piano they quickly fall in love (yet another realistic portrait of how relationships should work). Alas, Victor is so afraid of the wedding he can't remember his vows, and so he goes to practice them in the dark woods (stupid idiot) - where, by accident, he ends up finding himself married to a corpse.
He finds himself in the world of the dead, but quickly enough he finds that the world of the dead is much brighter than the world of the living. Less constraints, no restricting social codes, no evil priests - just lots of funky music. Eventually things work out for everyone despite the various baddies, but till then there's quite a bit of an adventure coupled with some basic generic statements on life that befit a film that's basically aimed at children who are at an age they're capable of handling a bit of horror: things that are foreign can be good, don't judge a book by its cover, etc.
So yes, simplicity is a problem with the film, but it's a problem you can forgive; it is a kid's film. The main problem, if you ask me, is that characters suddenly burst into song and way too often - and I just don't like that: I never burst into song in real life, nor do I recall others doing so. I can't remember a film in which I thought this formula works well, but I can forgive Aladdin; Corpse Bride is good, but it's not Aladdin. Yet, at the end of this short film, it's a case of all can be forgotten given the vivid imagination on display.
Best scene: In a second take on the piano music motif, Victor and the corpse get together with the aid of a piano. It's just a scene that is so well done, utilizing the best the animation can offer.
Picture quality: Digital artifacts are noticeable too often, but overall it's not too bad.
Sound quality: Very good! Not the truly aggressive / immersive soundtrack I really like the most, but still - effective and entertaining.
Overall: In the realm between the 3.5 and the 4 stars, I'd go with the higher option - just because good animation films deserve a go.
Posted by Moshe Reuveni at 4/02/2007 10:59:00 pm
Email ThisBlogThis!Share to TwitterShare to FacebookShare to Pinterest
Labels: Film