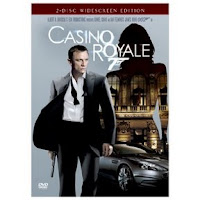 Lowdown: A successful revamp of the Bond character into a down to earth man.
Review:
There are plenty of good reasons to think that James Bond has not only been here way before I was, but he will also be here long after I'm no longer here. In case there were any doubts about it, the owners of the Bond franchise gave us Casino Royale - with a new Bond reincarnate, Daniel Craig, and a new character altogether: the movie feels as if the only resemblance between Craig and the ye olde Bonds is in the name and the 007 title.
The film starts with a short scene showing us how Bond received his license to kill in the first place. It's just like the opening scenes from previous Bond films, yet the difference is striking: It's simple, it's visceral, it gets down to basic violence - no more gizmos or catch phrases before/after making the kill. The new Bond is simple: what you see is what you get. And as the film takes care to show us on plenty of occasions throughout its 135 minutes or so, what you're getting now is a very manly man. Condensed testosterone, reduced sophistication.
One thing that didn't really change from the previous Bonds is the level of the story. We're still talking about a shallow plot of a nature that is hard to accept - unless you're a conspiracy theorist or you just like to think that there's more to life than this. However, the James Bond world is still a fantasy world of intrigue and violence and sex appeal even without the gadgets. I suggest you forgive me for not going over the plot; it's entirely coincidental to this film, especially when the main villain's character is of such a shallow nature as it is in Casino Royale. You do get some of the familiar Bond routines, though: a few jokes here and there (although they're of a different nature to the old Bond jokes; they sort of laugh at the old Bond image), you get the car chases (featuring flashy cars), you get exotic locations, and you get guys beating up one another (a lot). The basic violence is where things have changed: It's much more in your face and it's much more graphic; Bond gets injured, Bond gets covered with blood. Generally, Bond becomes flesh and blood.
The lead female character in Casino Royale is a bit of a change as well. This time around, the character played by Eva Green is quite a round character; she's not only there to serve as the sexy sidekick, she takes an active role in the proceedings. She becomes a bit of an alter ego to Bond, which makes it good that she's very well portrayed by the French Eva Green - whom I saw first in Kingdom of Heaven and who gave me reason enough to want to see more of her acting. And talking about acting, I've got to hand it: Mr Craig has done a very good job as Bond; I liked him in Munich, and now I like him even more.
One thing that's bad about Casino Royale, though, is that it's full of shit. Shit takes form in plenty of ways, most of them have been mentioned before in Last Action Hero. Product placement, for a start, is a very dominant factor in Casino Royale. After you finish watching it you'll either rush to the nearest Sony shop or puke every time you see the brand's name (the second option is more likely). Then there's the over the top action: Excuse me, Mr Bond, but some of the things you do on screen are impossible (hence the rather obvious usage of CGI to replace live characters on certain action scenes). And then there are the usual action film exaggerations: the endless clip, the bulletproof thin piece of wood that just happens to save the day 235 times for Bond, managing to run in between the bullets (which works only if you're the lead good guy), and general sexy usage of weaponry rather than the realistic way.
Ultimately, Casino Royale is one of those films you watch and really enjoy but forget about the moment the curtain rolls (or the DVD goes back to its menu). On its way back to the menu, though, Casino Royale is very entertaining: action so visceral and so full of impact has rarely been seen since Terminator 2.
Best scene: One of the earlier action scenes, featuring Bond chasing a black guy in an African location. The chase takes place over cranes and in between shafts, in a manner that reminded me of both Donkey Kong and Prince of Persia. It's exciting, but it's also as believable as your average bible story.
Picture quality: Quite good, but the filmmakers' choice of going for a high contrast picture means there is noticeable graininess to the picture.
Sound quality: Now, this is what all soundtracks should be like! Enveloping, aggressive, bass that goes so low you'll need to redo your foundations! But most of all, it's immersive and it's effective.
Overall: Grading Casino Royale is tricky. As a film it's not worth more than 3 stars, and that's quite generous. As entertainment, though, it is very much up there. I'll therefore settle for something in the middle - 4 stars.
Posted by Moshe Reuveni at 4/04/2007 11:49:00 am
Email ThisBlogThis!Share to TwitterShare to FacebookShare to Pinterest
Labels: Film