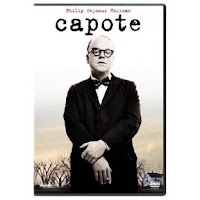 Lowdown: A famous writer becomes obsessed with the subject of his upcoming book.
Review:
The name Capote didn't mean much to me until I got to watch this film, but apparently this is the guy who wrote Breakfast at Tiffany's. Capote, the film, seems to trace what seems to be the real story of how Capote wrote another famous book of his and how this book that made him famous was also his downfall.
The film starts with Capote going to investigate the murder of a family in the rural part of nowhere USA in order to write a story on it for the New Yorker magazine. He takes an old friend of his, Nelle Harper, with him on the trip to help with the research; as it happens, Nelle has just finished writing a book called "To Kill a Mockingbird". As Capote and Harper browse around the murder scene and the characters, Capote falls captive to the subject of his investigations and sees it as an opportunity to start a whole new book genre: a plot driven non fiction book. Quickly enough the killers are caught, and Capote finds himself captivated by them; he is unable to finish his book without knowing what their fate is going to be as they go through a process of multiple court appeals. He deteriorates, becomes a chronic lier, and gets overcome with jealousy over the success of his research companion's book.
The story of Capote might have been intriguing on paper but it isn't on film. Sure, idea of the writer falling in love with a subject has fascinating potential, and the obsessions that drags the writer down as he is unable to separate himself from the subjects of his non fiction book is also a subject with plenty of symbolism. It's just that the film is way too slow and way too subtle to be interesting overall; it has the potential on paper, but as much as I wanted to like it it just lost me to boredom.
Phillip Seymour Hoffman has received an Oscar for his portrayal of Capote, but although I like him a lot for his other work I couldn't see anything truly special with his performance here other than a really annoying voice. I never pretended to be a good judge of acting, but it seems like the easiest way to get an Oscar as an actor is to play someone who is deformed in one way or another.
Best scene: Capote examining the coffined bodies of the murder while obviously falling deeper and deeper for the subject. It's just that the scene is nicely made.
Picture quality: There is enough noise in the picture to distract. Often editing cuts are not as smooth as you'd expect from a contemporary film.
Sound quality: There was an obvious attempt here to use the 5.1 facilities to create a subtle soundtrack. The results are, well, pretty subtle - to the point of making the effort a bit of a waste.
Overall: This is the type of film where you go "come on, get on with it" every five minutes or so. 1.5 boring stars.
Posted by Moshe Reuveni at 4/25/2007 10:13:00 pm
Email ThisBlogThis!Share to TwitterShare to FacebookShare to Pinterest
Labels: Film

I LOVED this movie!
The story was captivating, Philip Seymour Hoffman was excellent, the soundtrack was great. I don't really know how to put it in a more intelligent sounding way, I saw it a while ago, and it was one of those films that had me on the edge of my seat. When it was over, I had a lot to think about and didn't know if I really liked it or not. But the more I thought about it, the more I realized I did.

I was wondering whether you need to be an American to enjoy this film. All I can say is repeat that I have found it to be pretty boring, I suspect Jo was angry at me for my choice of rental DVD's, and that by now I'm pretty sure I have left Capote behind me...