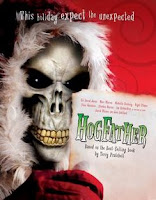 Lowdown: Discworld's version of a Christmas story.
Review:
Generally speaking, it's not in this blog's business to review mini-serieses, or anything of a TV orientation for that matter, if only because were I to do it I would have to spend my days as well as my nights blogging reviews.
Hogfather is an exception I would like to make, though: because it is based on a Discworld novel, because it is based on Terry Pratchett's work, and because we saw it on proper high definition, I thought I'd better write a short review.
Hogfather tells the story of the night before Christmas, the Discworld version. The accountants of the world, being accountants, seek out the services of the assassins' guild to kill the Hogfather - what we would tend to refer to as Father Christmas. The assassin uses an ingenius tactic: he invades the Tooth Fairy's castle out of the assumption that he who control the teeth controls the world, and he manages to dispense of the Hogfather. Death, sent to dispense with the dead Hogfather, doesn't really like what's going on, so he takes over the place of Hogfather and goes around distributing gifts to kids. And so the plot unravels, with many a character and many supposedly funny eccentricities taking part in a way that mirrors the real world but exemplifies the ironies of what takes place in the real world.
I have to say that I never really read a Discworld novel from start to finish and that I never really read the works of Terry Pratchett. I know that what I am about to say will incur the wrath of many readers of this blog (all two of them), but I will say it anyway: whenever I try to read Pratchett's work I realize pretty quickly why I didn't get into it before. Sure, it's imaginative, and sure - it's funny, but it's all so disorganized and lacking in meaning that it doesn't attract me. I can find myself better ways to amuse myself, and when I read I look for more than just a laugh. Usually.
In this sense, the Hogfather mini series worked exactly the way I expected it to work: it's imaginative and from time to time you do laugh (although way too rarely, if you ask me). But as I watched it I couldn't help thinking "so, what's the point?"; it was, it seemed, an exercise in being imaginative for the sake of being imaginative.
As far as having some sort of a position on Christmas, Hogfather also behaves pretty much as expected. It doesn't really take a position; it mocks everybody: the scientists, the atheists, and the Hogs Watch holiday's advocates. It finally (and quite reluctantly) does settle for a position that is similar to the one taken in the excellent book Life of Pie: If you don't believe that the sun is the sun, that is - if you don't believe - then the sun would be just a fiery ball of gas. That, according to Mr Pratchett, would be a great shame and a boring way to look at the world. I will end this discussion by saying I disagree: fooling ourselves that there is more to the sun then there actually is will not make our world a better place; the sun is even more marvelous when you appreciate it for what it actually is.
Best scene: Death has a philosophical discussion with the smartest thinker in the world - an analog computer with AntHill Inside technology - about the meaning of believing.
Overall: Creative yet boring. 2 stars.
Posted by Moshe Reuveni at 3/09/2007 11:03:00 pm
Email ThisBlogThis!Share to TwitterShare to FacebookShare to Pinterest
Labels: TV