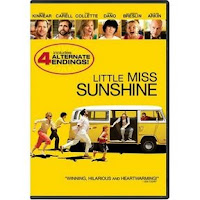 Lowdown: An intellectual's National Lampoon's holiday film.
Review:
Some films look to be nothing much on paper but end up being pretty entertaining. Little Miss Sunshine falls under this category: it's surprisingly entertaining, yet it does not ascend to the level of true genius.
The film follows a collection of characters, all of them belonging to one family, and all of them going through some sort of a crisis that wouldn't shame a comparison with the Cuban missile crisis. In short, it's a very dysfunctional family; in fact, it's a made up family, with some of the relations acquired through divorces and second husbands. The dysfunctionality embodies itself through a loser husband that looks for income through writing a book on how to be a winner; a gay uncle who just tried to commit suicide; a son that hates everybody and didn't say a word for the last three years; etc etc.
Then we learn that the young daughter of the family has won an entry to a national beauty pageant in California - the Little Miss Sunshine contest, open for girls aged 6-7. Despite of all their problems, the family knows that they cannot disappoint the girl on this one (as in they know they should do their best to prevent the girl from being as fucked up as they are), so despite all their differences they join forces to drive her 1000 miles or so away to California over the weekend in an old Volkswagen van. Thus the film becomes a journey film, and lo and behold - despite all of their differences, the family emerges from the experience stronger and more united than ever. It's easy to see why: All the things that take place during their journey are not only funny (sometimes hilariously funny), they are also the type of things they give you in team building sessions that companies often send you to; while those include all sorts of made up activities, what the family goes through in the film is anything but made up.
The journey, the jokes, the good acting, and the smart script all combine to make a film that packs quite a punch. Or does it? It seems as if the film's main problem is that it does not seem to go beyond those relatively basic levels into the level of making a statement of the type that would make the audience rethink their ways once the DVD stops spinning.
It is fairly easy to interpret the film as a film about the importance of the family nucleolus; sort of a "like it or not, they will always be your family and they will always be there for you no matter what" kind of a message. While I have no idea what the filmmakers have actually aimed at and while this interpretation is definitely a viable one, I would put my money on the true intention being not to point at the family but much higher, at society in general: we are all made of very different people - gay, old, drug users, penny less - each with their own idiosyncrasies; but we all share this world together, so we'd better recognize the differences between us and learn to love ourselves and the others for what we/they are. And as Ali G likes to say, we should "keep it real".
Best scene: There is a very funny scene when a cop stops the van on its way to California after its horn starts going off for no particular reason, but as funny as this scene is it pales in comparison with the talent scene in the Little Miss Sunshine pageant itself. I will say no more because I'd hate to ruin it for you.
Picture quality: Oddly enough, everything is wrong with the picture here, but nothing is too bad to ruin the experience all the way. There are digital artifacts aplenty, low effective resolution, color infidelities, noise - you name it; none are too bad, although when some of them join forces the picture is pretty ordinary, to use a euphemism.
Sound quality: My processor said this is a 5.1 soundtrack, yet it seemed like the surrounds were on vacation for the duration of the film.
Overall: Just scraping the 4 star level.
Posted by Moshe Reuveni at 3/03/2007 04:38:00 pm
Email ThisBlogThis!Share to TwitterShare to FacebookShare to Pinterest
Labels: Film

You liked the talent scene!?
I think that was my least favorite scene in the entire film. It was disturbing, anti-climactic and a sloppy attempt at a resolution.

a. Both Jo and I were roaring with laughter.
b. While I agree that it was a contrast to the rest of the film, I think it was a good one. Sort of a "stick convention up your..." ending.

Generally, I was just sick of the displays of the other kids: the way they were made to look and the way they acted was probably exaggerated for the film, but it was artificial. I think the situation cried out for something sincere and non-apologetic. That's what I meant when I said I think the film preaches for "keeping it real".

I am interested to know why you thought the scene was disturbing, though.