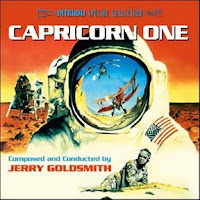 Lowdown: If you believed they put a man on the moon...
Review:
To me, Capricorn One is a blast from the past. This is one of those films I used to watch when I was about 10 or so on VHS, time after time, mainly because of the dogfight scene at its end. I was curious to see how things look like 25 years later, and I think I can say that while I liked the film for different reasons now (the dogfight's special effects are pretty bad by today's standards), Capricorn One is still a very good film.
The film is directed by Peter Hyams, who seems to specialize in fringe science fiction: he did Outland, which I quite liked, but he also did the more recent A Sound of Thunder which was pretty bad. Consistency seems to be an issue for him.
But the director's qualities are not of direct concern here. What is of direct concern is the film, which tells of a fascinating plot: Taking place at around the Apollo period, the USA is about to launch a manned mission to Mars - a mission that would have humans step on another planet for the first time. Everything is ready for launch when suddenly the three astronauts are told to get out of the rocket and end up being secretly transported to a hidden army base. There they learn that there was a problem with their ship that would have meant they would have died on the way to Mars, but since NASA doesn't want the project canned they were going to pretend everything is still going according to plan and the mission to Mars is still alive and kicking.
The astronauts end up playing being Martians inside a film studio, and they don't particularly like the idea. Questions start to be asked by certain people, mainly Elliot Gould, but those that ask the questions seem to disappear in all sorts of spectacular ways.
There is not doubt this film could supply enough thinking material for every conspiracy theorist out there. I used to regard the film's premises as a joke, something that can never happen - no one can do a fake landing without the bubble bursting - but over the last few years I have met more than a few people who seem rational in every way yet they truly believe that the American moon landings never took place. They blindly accept other things - say, that they can take a photo and that this photo could be seen by someone across the world in just a few seconds, but they won't accept the landings. Go figure.
As hard as I find accepting the notions of such people, this is what Capricorn One is all about: it's about the way we people seem to need to have some illusion to stick with so that the world would seem a nicer place to live in, and it's about the ease and the danger with which this fake reality can be created, especially given today's technology. The film definitely hints towards religion as one of those illusions that we seem to require (through a scene in which the soon to be launched astronauts are given with a copy of the bible to take with them to Mars), but most of its sting is to do with the danger of accepting higher authorities for granted at an age where these authorities can shape reality at will.
Philosophy aside, Capricorn One is a pretty effective thriller. It is well directed and it offers some good acting, good action, and good thrills. Sure, by now it looks more than a bit dated, but on the same note it is a good representative of the realities of the post moon program years. It feels authentic, even if it has quirks like helicopters that seem to need to face one another in flight in order to communicate instead of using a radio; the type of silly things that make me afraid I just like the film because of good old memories rather than it truly being a good film. But then again, do I really need to explain myself that much? A film discussing space exploration that features some dogfight scenes as well as some other thrills will always start from a higher ground in my book.
One last anecdote: OJ Simpson plays one of the three astronauts. He's not too bad, actually...
Best scene: The astronauts talk to their families, apparently from space, but really from a hidden studio. There is a lot of well nurtured tension there, between the astronauts that don't want to cooperate, the project directors who have a big secret to hide, and the rest of the world that is hungry to see its heroes.
Picture quality: This has to be one of the worst DVD's ever, if not the worst. The picture is just horrible: very low detail, noise all over, digital artifacts, colors that are not there, fuzziness and lack of focus - it looks like it was mastered from someone's 8mm bootleg copy. And for a film shot in 2.35:1, a 4:3 presentation is inexcusable.
Sound quality: Very badly compressed mono; I wonder if the film was originally mastered in mono.
Overall: 4 stars, but I wonder how many of those are due to the child who loved a good airplanes.
Posted by Moshe Reuveni at 3/07/2007 09:55:00 pm
Email ThisBlogThis!Share to TwitterShare to FacebookShare to Pinterest
Labels: Film