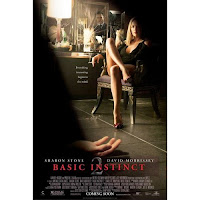 Lowdown: A poor attempt to redo a classic.
Review:
Back in the early nineties, Basic Instinct was the talk of the town. I have to admit I haven't watched it at the cinemas; I never really got the opportunity (couldn't get a date). I ended up watching it eventually on laserdisc when it was the only laserdisc I've had (my first ever laserdisc was Terminator 2, the reason why I bought a laserdisc player in the first place; but when it got damaged the only one they could replace it with was Basic Instinct). And given that at back then it wasn't easy to acquire films, unless you surrendered to inferior VHS, I got to watch Basic Instinct many times.
I thought it was ok, but nothing spectacular. I'll grant it that it's a classic, but it wasn't a particularly good film. I severely doubt it would have been the hit it was under today's terms and conditions, when porn (and pretty much everything else) has to be much more aggressive than what Basic Instinct had to offer in order to attract attention. The film's main attraction, Sharon Stone, is still an actress I remember mostly from her performance in Total Recall. In fact, what I liked most about Basic Instinct was the Gerry Goldsmith theme music and the house Sharon Stone had in the film - a magnificent house by the beach. I wouldn't argue against having one just like that.
Well, 15 years have past since the original, and now we get Basic Instinct 2 with a Sharon Stone that looks as if some heavily plastic surgery took place. There is silicon aplenty in her now, and I'm not talking about the CPU in the Mac she uses in the film. And it's not only the lead role that's second hand now; the director of Basic Instinct 2 is not exactly a Verhoeven. In fact, long before you ever get to watch it, you know that Basic Instinct 2 is going to suck big time; the only reason why I bothered renting it was curiosity, and I can only assume the producers were hoping for enough similarly curious minds when they set out to make this film.
The story of Basic Instinct 2 follows the agenda of its predecessor to the letter. Certain key scenes - for example, the disco scene - have been copied one to one.
We start with Stone making love to a guy who ends up dead as the sexual act reaches its peak, we move on with the police investigating the death, continue with someone associated with the investigation getting deeply personal with Stone, move along with subsequent murder cases where it seems obvious that Stone did it - and end up with another person being blamed for it all, while all the while our common senses tell us that it was Stone that did it.
So what did change, aside from Stone getting older and aside of her breast implants? [Disclaimer: To be honest, I haven't seen Basic Instinct for ages now, and I don't know whether she had them back then, too]
The thing that hits you immediately as you watch the the sequel is that what used to be sexual innuendos in the first film have become terribly explicit in the second. Every second sentence Stone says incorporates the word "come" in it, and it's not in the usual context of arrival. But it doesn't stop there: the entire film has a one big "contrived" label on it: things don't flow, things are artificially made to happen.
The plot is very second rate and in fact it's quite boring. There are way too many references to the first film - such as mentioning character names and events - which, given the 15 years that went by, I don't think the producers can expect everyone to remember to such a level of detail; not everyone has seen the laserdisc as many times as I have.
Once it arrives, the twist at the film's end feels as if we - the audience - have been cheated. In order for the twist to be accepted, you have to accept that a lot of the things you have just seen in the film didn't happen or didn't happen the way you thought they did; but unlike other films that are designed to make you think that what you expect to be real is not really real - say, The Usual Suspects, where the lies fit extremely well with the formerly perceived truth - the fit in Basic Instinct is loose, to say the least.
But the very worst thing Basic Instinct 2 has done is to move the plot from San Francisco to London without even the slightest attempt at explaining why. And that is pretty much the story of this film: an attempt to recreate the exact same sensation using the exact same formula with just a few minor changes; but those changes are not minor, and 15 years cannot be erased just like that. And worst, the changes are far from being improvements; they are a step back. Actually, not a step back; a giant leap back.
The only good thing I can say about the film is that it often quotes the original's theme music.
Worst scene: The opening scene in which Stone drives a Porsche at Formula 1 speed through the rather too empty streets of London while having sex with a doped passenger is so stupid and so badly done you think it's a joke. The scene's dialog is probably the worst ever.
Picture quality: The picture is too grainy and resolution is on the low side of things.
Sound quality: Inconsistent. Some scenes feature quite a good sound utilizing all channels, while the rest of the time everything comes at you from the center channel.
Overall: Silicon doesn't do it to me anymore. The entire film's a fake - 1 star.
Posted by Moshe Reuveni at 3/31/2007 10:54:00 pm
Email ThisBlogThis!Share to TwitterShare to FacebookShare to Pinterest
Labels: Film