Book: The Stars My Destination by Alfred Bester 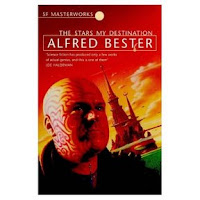 Lowdown: Book sized science fiction comics.
Review:
The Stars My Destination is one of those books that everyone who is into science fiction will list as one of the all time classics. I, however, didn't like it that much when I read it as a teen: I found it thrilling and interesting, but not that moving. I did, however, wanted to give it a second chance. Turns out my teen notions still apply today, for a change.
The story takes place during the 25th century or so. By then it was discovered that people can do all sorts of things if they set their minds to it: almost everyone can teleport themselves, and some can even read others' minds or transmit telepathically. People's ability to teleport means that economic practices that used to work for thousands of years no longer apply, and war breaks within the solar system as a result.
Gully Foyle, the book's hero, is one of this war's victims: the book starts with him stranded on his severely hit spaceship, totally helpless but for his will to survive. A friendly spaceship passes by and sees him, yet it doesn't stop to rescue him; Foyle becomes so angry that he makes it his life's quest to rescue himself and seek vengeance. He sets his will power to it, becomes a MacGyver, and goes on a major vendetta rampage.
There is no doubt The Stars My Destination is a thrilling book. It keeps you on your toes and you want to read ahead to see what happens to Foyle as the plot thickens. However, thrill alone does not make a book great (otherwise crap like Da Vinci Code would be the ultimate book ever). There is also no doubt that the book paints an interesting and a very cynical version of the world as a world controlled by companies and brand names, a world in which anything goes if it serves those with the power and the money: you can definitely see how this vision applies to today's corporate led world. And the statements the book makes on how far people can go if they set their minds on something and how far we can go if we expand our horizons and use our imaginations are also fairly interesting.
All that said, I cannot say I think The Stars My Destination is a good book. I think a lot of it is Neil Gaiman's fault: in the book's introduction that he wrote, Geiman says that Alfred Bester turned to become a comics artist after writing the book; the result was that throughout reading the book I couldn't help but feel how well it all fits into a comics framework. I was, in effect, quite distracted.
But there is more to my lack of satisfaction with the book than comics. I think it comes down to the book not having much to say other than delivering its thrilling plot. I mean, it does touch some interesting subjects, as I mention above; but their treatment is rather superficial as Bester just browses by them. You sort of feel it's a waste for him to create this world and leave it with so much unfulfilled potential. And then there's the book's ending, which feels like it was written on drugs; but I won't go too far into that, as I don't want to ruin the experience.
Overall: The book hasn't aged but I wouldn't call it a classic. 3 stars.
Posted by Moshe Reuveni at 3/11/2007 10:54:00 pm
Email ThisBlogThis!Share to TwitterShare to FacebookShare to Pinterest
Labels: Book

For each his own, different strokes and all that.
Except in this case, where you are completely, utterly wrong. Or if you prefer – It is you who are mistaken, about a great many things.
My problem is that I have so many things to say, I can’t really form a coherent argument. Also I want to refer to specific plot point, so I will assume every single one of your readers has already read the book

* First of all I thought you were a sucker for time travel stories. Isn’t it great to look back on the story and see what really happened?
* Not having much to say?! It’s a story about revenge, how it can destroy your life and how it is ultimately futile. As you’ve mentioned it’s a story of power and the length for which people will go to get it, but also on the limits of power – Some telepaths can send, but not receive, others are morons. You can teleport – but only up to a limi, and only under certain conditions. It’s a satire on our big-corporate greed-driven society (which should have been lost on us since it was written half a century ago, but unfortunately we have not changed much, or not for the better, anyway)
* It’s a marvelously rich story with space travel, Psi powers, weird communities.
* It’s starts with A Tale of Two Cities, and goes on through elements from Robinson Crusoe, and of course, throughout, The Count of Monte Cristo.
* And the ideas? Things that would be complete novels for some authors, are just throwaway ideas for Bester – Christianity (and religion in general) is an obscure cult, akin to animal worship. Franchises that are so alike that the salesmen are surgically altered to be identical. The sanctity of plant life on Mars, the pseudo-scientific Scientific People, Skoptsies, …
* The wonderful world of jaunting. It’s not just the same earth we know only with teleportation – things are quite different as a result. Puritanism, war, home security, jails, police – everything is affected.
* The plot is cool. I’m not just talking about your so-called ‘thrills’ – it’s the number or reversals. If the Vorga had stopped for Foyle, he’d have been murdered along with the refugees. And the only reason he was there to begin with was an O.S. trap, but not quite… It’s a hunt for money, then for PyrE then for a man who can change the world.
* It’s such a good adventure story. I’ve known people who dislike Science Fiction and still loved this book. People who didn’t like books at all and loved it. (ok, it was just the one guy, but it’s still something)
* Including the copy I had at home growing up, I’ve had four copies of this book (that guy who didn’t like reading liked it so much he never returned it).

Well, I had a few more points, but this is getting ridiculous. I’ll just sum up by saying that The Stars My Destination is not just a good book but one of the best ever.

I was actually curiously waiting your feedback because I know you like it so much.
I'll think of what you say, and I agree you're right in what you say, but... I don't know, it doesn't work on me. It's thrilling, sure, but the inflation of ideas and concepts makes it too unfocused for me. Style wise, I prefer the Asimov way.
Anyway, much appreciated.

The more I think about it, the more I think that the book's main problem is that it aimed at too many targets. Sure, it has some brilliant ideas in it; but mentioning an idea such as cloning franchisees in half a sentence without really developing the concept and exploring it does not make a book great. It feels like a catalog of interesting ideas, mixed and brewed to a lesser effect.