Film: Plots with a View 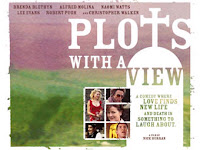 Lowdown: Lite Chocolate.
Review:
If you're on the lookout for a lovely film to chill out on a 38 degree week with, not much can compete with a lovely European made innocent feel good comedy. Plots with a View delivers in both the innocent comedy department as well as the feel good department, and it also has some nice performances by its key actors.
Set in a small town in Wales, the film follows Alfred Molina in a role pretty similar to what he did in Chocolat (as opposed to his short lived role in Raiders of the Lost Ark) and a film that, overall, feels like Chocolat made in Wales.
Poor Alfred is in love with Betty, and it's obvious she likes him too, but he's too shy to make a move; Betty is grabbed by a fat bastard of a guy who uses and abuses her instead. She works all day minding after her husband's not so grateful mother and looking after things while the husband is busy messing around with his mistress (Naomi Watts, who gives a performance worthy of many an Ampere).
Things change when the husband's mother dies after chocking on her breakfast cereal. Molina, who grew to become a single funeral services manager, takes care of her body. In the process he convinces Betty that they were really meant for one another due to their love of dancing (an opportunity the film uses to throw in a few musical - dancing bits). Betty agrees, but the only way they can achieve being a couple is if Betty pretends to be dead so they can both run away together.
And so the plot thickens as Molina and Betty stage Betty's death and subsequent funeral, with things getting even more complicated once Watts and the mischievous husband confess over Betty's not so dead body and with Christopher Walken trying to establish a competing funeral services company with some American panache. It sounds complicated, but all the plotting works out just fine at the end...
As I already hinted, the film feels a bit contrived. Unlikely things happen just because they fit what the film would like to portray, and there are lots of contrived scenes and contrived twists (the musical / dance bits are an example, being totally detached from the reality of the film).
The film would not let us lose a grip on what it is trying to tell us, and it keeps on informing us who the good guys are and who the baddies are. Some perceptions change, though: The evil American entrepreneur turns out to be not as bad as you'd expect; actually, none of the characters turns out to be too bad. This is, after all, a feel good film.
Another surprising bit of trivia about the film is that the plot seems to be advanced through the usage of clips from Jerry Springer. Whether you consider this to be positive or not, Plots with a View is a nice, somewhat original, feel good comedy that is just perfect for the occasions in which such a comedy is due. The key thing is not to expect much - just relax and go with the flow.
Tell tale scene: A good scene representing the film's overall way of saying things is when Molina and Betty contemplate the staging of her death at a grocery store. Betty asks "but what would happen if I end up being buried alive" (or something along these lines), and just as she says it a tomato falls from the counter and splashes over the floor.
Overall: A nice, smile inducing 3 stars.
Posted by Moshe Reuveni at 2/18/2007 11:52:00 am
Email ThisBlogThis!Share to TwitterShare to FacebookShare to Pinterest
Labels: Film