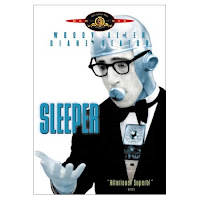 Lowdown: A grotesque futuristic look at our society and its conventions.
Review:
You wouldn't expect Woody Allen to be a great science fiction performer, but Sleeper is science fiction and Allen definitely performs.
Made in 1973, the film tells the story of an average New Yorker, as in Woody Allen himself, who was frozen after a treatment gone wrong only to be awaken by an underground 200 years later. The underground hopes to use Allen as a secret weapon against the dictatorship running this futuristic USA, but through a collection of mishaps their plans go astray. A mishap follows another mishap, and Allen finds himself escaping the authorities disguised as a robot. He "befriends" his human master, Diane Keaton, and together and apart they have themselves a collection of adventures.
The thing about Sleeper is that the plot doesn't really matter much. The film is basically a collection of sketches ranging from the slightly funny to the too weird to be funny anymore. Some times you get a big laugh, other times you just smile, but the main point of the film is the way in which it attacks our normal conventions and the things we take for granted.
Examples for that are far too numerous to list here in full, so I'll just go with the more memorable ones: Fatty food is actually healthy; smoking is the healthiest thing you can do; and it doesn't really matter who your leader is and what their supposed ideology is, your life will remain the same old shit. Eventually, according to Allen, all that matters is sex and death. And I agree (in an interpretive kind of a way).
Still, as creative in the thought provoking department as Sleeper might be, it is still to defused for me and not funny enough to compensate for said fuzziness. Sure, there is a lot of creative genius in it, but it's just not thrilling enough. Maybe I've been spoon fed by Hollywood for too long; if that is the case than there's probably no cure for me by now.
Best scene: There are many notable scenes in Sleeper; the film is a collection of notable scenes. The one I can relate to the most is the scene where Keaton and a friend try and recreate a 20th century Jewish dinner in order to arouse memories of the ancient past in a Woody Allen that was brainwashed by the authorities.
Picture quality: There are some artifacts caused by the telecine process and overall the picture is somewhat lacking in detail, but for a 34 year old film the picture is overall surprisingly good.
Sound quality: Standard Woody Allen mono sound.
Overall: 3 stars. I suspect the film is a relic of an era where everyone was high most of the time.
Posted by Moshe Reuveni at 2/15/2007 10:39:00 pm
Email ThisBlogThis!Share to TwitterShare to FacebookShare to Pinterest
Labels: Film