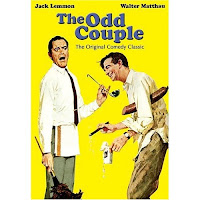 Lowdown: Friends will drive you crazy.
Review:
One of cinema's greatest acting duos has to be the pairing of Jack Lemmon and Walter Matthau. To be honest I don't know when their first adventure together took place, I just know that I saw a few of them and I enjoyed them all, so when The Odd Couple looked at me from the shelves of the public library I didn't think twice. The Odd Couple could indeed turn out to be their first collaboration, but regardless of that it's a funny display of acting on behalf of the two.
Set on what seems to be New York during the sixties and based on a Neil Simon script, The Odd Couple follows a couple of weeks in the lives of Lemmon and Matthau. Lemmon is a useless guy who was just dumped by his wife and can't even manage to kill himself; Matthau is the loyal friend who is already divorced and jumps to the rescue by inviting Lemmon to stay with him in his eight room apartment. Alas, eight rooms turn out to be much less than enough as the odd couple does not really manage to get along.
Given that this is a Neil Simon script, it feels more like a theater production than a film. True, there are some exterior scenes, but the editing tends to be on the slow side of things, camera movement is rather limited (although it attracts attention to itself when it does happen), and generally speaking plot advancement is heavily based on dialog and on the excellent acting - just as you'd expect to have in theater.
As a comedy, The Odd Couple is lesser than the funniest film ever made, and laughs are quite rare. Smiles, though, are frequent, and the film definitely has a certain charm that managed to work on me; I suspect that was caused mainly by the fine acting and the smart script. Overall, this is a relatively innocent film that tells the story of a friendship between people and the power of such friendship.
On a more personal note, the film has made me slightly annoyed. The group of friends depicted in the film seems to be able to just spontaneously show up at a friend's place and act as naturally as they would in their own place. Sadly, I cannot say that there is any risk of that happening to me; spontaneity has been greatly removed from my social life, replaced by a lot of formality and official coordination. Some of it is to do with the commitments that come as you become older, but a lot of it is a sign of modern times and the closing of doors between people.
Best scene: Matthau shows Lemmon what he thinks of his spaghetti (or linguine) in a fine demonstration of rage.
Picture quality: The film's age (made in 1968) definitely shows in the overall lack of detail, especially in the blacks.
Sound quality: Other than a few seconds at the very beginning and at the very end, this is essentially a limited mono soundtrack.
Overall: A recommended 3 stars display of acting.
Posted by Moshe Reuveni at 2/18/2007 08:52:00 pm
Email ThisBlogThis!Share to TwitterShare to FacebookShare to Pinterest
Labels: Film