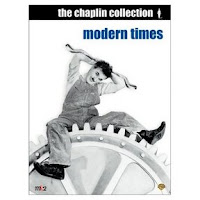 Lowdown: Chaplin versus the capitalist machine.
Review:
Classics don't come in any more classical form than Charlie Chaplin's modern times. The story of a factory worker / tramp driven crazy by the inhumanity of his work and its surroundings and by the automaton like people around him, eventually becoming a true outsider, truly surprised me: I have seen this film before, ages ago; yet I didn't expect what I remembered to be a slapstick comedian to also discuss very serious agendas in between stupid jokes.
Indeed, in modern terms the film suffers from its over reliance on slapstick comedy. Chaplin excels in performing his tricks, and some of them look as if they are quite dangerous and feel as if they took many takes to get them right (Chaplin blindly skating at the brink of an abyss is one example I can think of). It just feels way too over the top, not as realistic as what we're used to by now; I assume that back in 1935, when the film was produced, this was cutting edge material.
It's not only the slapstick that brings the film down: it is way too obvious, way too "in your face" to be accepted as it is by today's standards. The film starts with a shot showing a herd of cattle being led into a factory like compound, immediately followed by a shot composed in exactly the same way showing a herd of people coming out of the subway on their way to work. The comparison is dead obvious, but today's audience does not require it to be that blunt to get the point. At least I hope this is the case.
Still, complaints aside, Modern Times is - as I already said - a classic. I can repeat the film analysis from the DVD supplementals but I won't; I would just say that Modern Times is a true work of art in the cinematic side of things. Take, for example, the factory in which the first part of the film takes place: we have no idea what it is manufacturing; we just see it as a place that robs the humanity out of the people working in it, a place of utter futility that benefits no one. The artistry is driven to its peak in the famous scene where Chaplin ends up in between the cogs of the machines, rolling around like film does in a camera. Film making doesn't come any better than that, yet this is was shot in 1935! I have seen a copycat scene of this one only recently, in Woody Allen's Sleeper; the original is better.
As I already said, what really moved me with Modern Times is the way in which Chaplin tries to alert us about this materialistic world we built ourselves, a world in which machinery takes the place of humanity and making money is the noblest goal. A dog eat dog world. Between globalization and the Enrons of this world, the message that was relevant back in the days of the great recession is just as relevant today as it was 70 years ago, with Chaplin correctly asking what the benefits of this world we have created for ourselves are. His answer is provided through the actions of his tramp character.
Best scene: The classic scene inside the machine aside, the scenes in which Chaplin works on the production line tightening screws and going crazy in the process is not only smartly directed, it is also extremely funny.
Picture quality: Well, it's black and white, and it's 4:3...
Sound quality: Sound is a very interesting aspect here, as Modern Times was shot as a silent film at a time in which films were no longer silent. There is music, there are sound effects, and there's even dialog - but there are also still silent film captions. Chaplin himself never says anything coherent, although he does sing in gibberish.
Overall: By today's standard I would give the film 3.5 stars. It's brilliant, but it's also overly slapstick based. That said, this film should not be judged by today's standards: it is a relic of another time altogether, and as a piece of cinematic history it is a masterpiece.
Posted by Moshe Reuveni at 2/27/2007 10:57:00 pm
Email ThisBlogThis!Share to TwitterShare to FacebookShare to Pinterest
Labels: Film