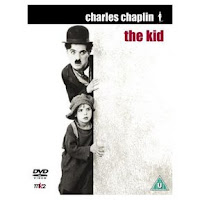 Lowdown: Charlie Chaplin confronts the child within.
Review:
There is not that much for me to say about Charlie Chaplin's The Kid. It was made in the early 1920's, it features Chaplin's tramp character, and it's your classic silent film; I think that would sum it up best. It's also probably the shortest film I got to review, at just a bit more than 50 minutes.
The story is fairly simple, at least by today's standards. A mother abandons her baby child; the tramp find him and takes care of him; the baby grows to become a child; the tramp and the child face all sorts of troubles together, culminating in the child being forcibly removed from the tramp by the authorities.
There is not much in the way of hidden agendas to the film beyond its general criticism of a society that is critical towards women who stray out of convention and beyond the issues of the uncared for poor vs. the authorities (magnified later in Modern Times). At its core, The Kid is a basic story about the unconditional love between the tramp character and the kid; that's all there is to it. It is done well, and the result is surprisingly emotional, making you not notice the slapstick and the fact that Chaplin and the kid are basically criminals; you identify with them just as well.
According to the supplementals the film represents Chaplin's confrontation with his own childhood memories: Apparently, he was given away by his mother (I'm probably severely distorting the story here). Not that this should matter to you when you watch the film, but it does help explain why the emotional impact of the film is so impressive.
Best scene: Chaplin storms the government car that takes the kid to an orphanage Indiana Jones style (as in the Raiders scene with the truck carrying the ark). Pretty impressive, given the period.
Picture quality: Once again, black & white, 4:3. So what.
Sound quality: There's some nicely recorded music accompanying this one.
Overall: Very impressive even without taking the period aspect into account. 3.5 stars.
Posted by Moshe Reuveni at 2/28/2007 10:45:00 pm
Email ThisBlogThis!Share to TwitterShare to FacebookShare to Pinterest
Labels: Film