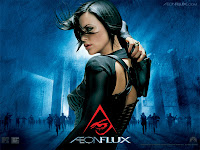 Lowdown: Nothing can stand between Charlize Theron's killer thighs and saving the universe.
Review:
Some things in life are more to do with style than substance. Most fashions are this way: take, for example, the iPod. It's not that good and there are many imitations that outdo the original, yet most people would get the iPod just because - well, because it's fashionable.
Well, if that's the case, then Aeon Flux is a fashionable film. Story wise, it's nothing we haven't seen before: set in a future where not much has been left of humanity due to some killer plague, what is left of us is concentrated in one city ruled through a dictatorship. Those that protest disappear mysteriously, and resistance is scarce. That is, unless you count Ms Aeon Flux - Charlize Theron - who can literally capture a fly with her eyelashes (I'm not joking). With her special powers - including a haircut that won't let a single her stray, a bra that would make my deceased grandmother look sexy, and thighs that can wrap themselves around even the most ruthless of enemies - you can count on Charlize to save the day.
There is a point to the story: there is an element of green policy preaching in the warnings against this industrial disease that might strike us through our seemingly innovative technologies. In the DVD supplementals they talk about genetically modified crops, which sort of annoys me because I think loose antibiotics put us under a much more severe danger yet no one seems to make a fuss about those. Ultimately, the film comes down to this sophisticated genetic trickery ploy, which might have been good and might have been interesting if it wasn't a total abuse of everything genes stand for: basically (and I'm trying not to ruin the film for you here), the film suggests that genetic clones can tell what happened to their originals, as in that they share the memories of their originals. The film also suggests that clones would be totally identical to their originals. The problem with both of these claims is that they are not science fiction, they are fantasy; the film, however, poses as serious science fiction with these two claims being at the center of its existence.
However, the film's messages are not the point. The point is that the message is quite irrelevant in this film that is all about style: the style in which people move, the style in which people talk, the style in which Charlize is dressed (or undressed, although disappointingly the film never delivers in this department), the sets and the choreography. That is pretty much all that matters.
At the bottom line we have ourselves a film that was made either to (a) satisfy (or rather tease) horny men and gay women and/or (b) satisfy the style council. I'll ignore the first option and say that although style is beneath me in day to day life, the end result of this film is intriguing enough to merit a look. Not bad at all; quite unique, come to think of it.
Best scene: Naturally for this film, it's the scene where Aeon Flux wakes up wearing a pyjamas. The point of the scene is the pyjamas - they are not particularly practical, if you catch my drift.
Picture quality: At times it's good, at other times it's hard to make out the finer details. For a film where looks are all that matters I would have expected a better job, although this DVD is not too bad.
Sound quality: Now this is how an action film should be like. Noisy, aggressive, cool. Sure, there are more articulate soundtracks out there, but this one kicks ass.
Overall: A stylish 3.5 stars.
Posted by Moshe Reuveni at 2/12/2007 10:07:00 pm
Email ThisBlogThis!Share to TwitterShare to FacebookShare to Pinterest
Labels: Film