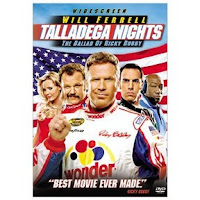 Lowdown: The American and the un-American compete in NASCAR racing.
Review:
I've always found NASCAR racing to be silly. No, this is not something I have concluded after watching Days of Thunder, it's just the lack of variety in the oval circuits that made me draw this conclusion. After watching Talladega Nights, I know I'm not alone in thinking this way.
First and foremost, Talladega Nights is a Will Ferrell film. The film follows his escapades as Ricky Bobby (Ferrell) from the minute he is born in a speeding car, through his school years where he adopted the motto "if you're not first you're last", onto him becoming a NASCAR race car by accident, then becoming the NASCAR champ, and then facing a nemesis. In the process he loses everything, but as this is an American film he also makes a comeback. That is all, in a nutshell; the most important thing to know about the Ricky Bobby character is that he is a dumb cliche American that manages to achieve the American dream through a fluke; and the American dream, in his case, is becoming too rich to know how to spend his money, having a dumb but good looking wife that only cares about his money, and having two rude sons that are - how can I say it? - extremely self centered.
Being a Will Ferrell film - he even takes credit for writing it - you know this is going to be a crazy film where he will show off his controversial talents in doing crazy stuff. He is not alone in this one, though: sharing the scene are John Reilly as a NASCAR veteran from good old Days of Thunder who plays Ferrell's frustrated number two, and Sacha Baron Cohen (i.e., Borat) who does a magnificent job playing Jean Girard, Ricky Bobby's nemesis.
If you can point your finger at one thing that this rather crazy film is about, it would be the pitting of Ricky Bobby as the generic American standing for everything that is American - as in advertising a very vicious looking blade that no person should find useful but is available at Walmart - against his exact opposite, in the shape of Jean Girard. Girard is French, he is gay, he is married to a guy, he comes from Formula Un (you know, that series where they actually turn), and he reads philosophical books and drinks his macchiato while racing his car. Ferrell is the straight ignorant guy, Cohen is the sophisticated European guy... but the combination of pitting them one against the other doesn't really work. Instead of a "clash of the Titans" sort of thing, where you would expect them to clash on the circuit and clash ideologically, you don't get much of a racing clash and the ideological clash quickly deteriorates into a farce of improvisations by both actors. While these improvisations are good - allow me to say that I think Cohen is the better of the two, outmatching Ferrell in his own game and becoming the one really good thing this film has to offer - the entire point about the American vs the un-American just washes off to become meaningless. To be fair, I would say the fight here is not between American idiocy vs. European sophistication, but rather a no brainer satirical look at the culture currently dominant all over the world: the culture of adoring so called celebrities for their meaningless achievements in fashion and sports, the culture of dismissing and ridiculing anything that requires thought or a brain, the culture of consuming (both in merchandise and in sex), the culture of worshiping the money god. But as I said, the message is too unfocused to truly pass through; the main event of the film is not the message, but rather the funny sketches it offers throughout.
Yet, are these funny sketches really funny? At the beginning they are; but then Ferrell has his breakdown and loses everything, and from then and up until he recovery (the bulk of the film, time wise) things stretch far too long between laughs; it looks as though the director couldn't bring himself to cut a few scenes that he liked in favor of having a well streaming film. The result? Essentially, a pretty boring film.
So there you have it. Talladega Nights is:
Best scene: The great Ricky Bobby family, featuring his sons Walker and Texas Ranger (yes, Texas Ranger) have themselves a dinner featuring the full goodness of the family kitchen - Dominos Pizza and KFC. They say grace to baby Jesus because that's how Ricky Bobby likes to see him, and the kids shout out profanities at their grandfather.
Picture quality: No artifacts, but colors look all washed out. Did anyone bother to watch this DVD after it was mastered and before it was sent to production?
Sound quality: Inconsistent. The racing scenes are quite good, but some of the other scenes feature noise and distortion aplenty. Dialog, too, is often not that very well recorded.
Overall: The laughs are too infrequent and the message too hazy (and too crazy). 2.5 stars.
Posted by Moshe Reuveni at 1/21/2007 06:14:00 pm
Email ThisBlogThis!Share to TwitterShare to FacebookShare to Pinterest
Labels: Film