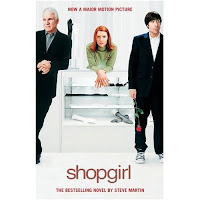 Lowdown: According to this examination of two rather exaggerated relationships, for a good love affair all that you need is love.
Review:
Shopgirl is a rather weird film. I couldn't really work out what it was about until quite late into the film, which is rather extraordinary for an American made film. Eventually, though, I concluded the above lowdown statement.
The film follows Claire Danes, a Vermont native living on her own in Los Angeles and working at a boring job in a huge high class fashion shop. And if there is one word with which you can describe her, it would be 'lonely'.
Then one day she meets Jason Schwartzman while doing her laundry. Jason is the ultimate repulsive guy that would stir any girl - other than the utterly lonely girl - away. While he's not a rude jerk, he lacks any social skills whatsoever. Still, Danes gives him a chance and lets him in her apartment, and he manages to ruin it, too.
And then she gets courted by Steve Martin, a rich old guy who works in Seattle but lives in LA. He buys her lots of stuff, and being the lonely person that she is Danes falls for him. Yet Martin doesn't really care much for her, treating her as the provider of sexual services while in LA.
I won't go deeper into the plot and into describing the relationships that transpire as it would ruin the film for you. I will just say that at its core, Shopgirl is a not that funny romantic comedy that I actually did enjoy, overall, even if this last sentence doesn't sound that promising. You see, I narrowed it down to being a story about love, examining the concept by presenting us with two very different extremes: Danes has relationships with two characters a normal person would not encounter under normal circumstances, if only because characters of the like of Martin and Schwarzman don't really exist much, if at all. It's this extraordinary way of the film that makes it uniquely nice, if still far from great.
The film helps us figure out what's going in two ways. On one hand, we have a sub-story where a fellow shop assistant of Danes becomes jealous of her dating this rich guy, so she sets up a trap to get Martin - only she ends up with Schwartzman instead. And then there's a rather annoying narration thing going on, that sort of acts as "if you didn't figure out what's going on in this film because you're an idiot, well - here's the executive summary for you". The bottom line is, as I already said, that the film tries to examine what love is all about and what is really important in love by examining exaggerated scenarios (which help the comedy work, to a point). The film's conclusions, though, cannot be said to be truly mind numbing: it basically says that money can't buy you love, and that the most important thing people look for in a partner is being loved in return. Still, is the film worth the ride? I think it is. It's entertaining enough to make you care for Danes, despise Martin for being a dick-head, and get truly repulsed by Schwartzman (no person who is the product of billions of years of evolution can be as bad as him!).
And just for the record: I never really liked Steve Martin, yet it's his book that the film is based on.
Best scene: The scene when Danes brings Schwartzman home the first time and it turns out he doesn't have a condom with him. I won't spoil it for you, I will just say that it's funny and it gives you the same shivers that Borat like humor does.
Picture quality: Devastatingly bad. Amazingly bad. It's not bad in the way that digital picture can be bad; it's analog bad. It's as if someone took a cinematic copy of the film, left it at the bottom of a train station's toilet for a month or so, and then made a DVD using that copy.
Sound quality: Very basic other than the occasional expansive bit of music. Hardly anything in the surrounds throughout the film, though.
Overall: I was thinking of a 3.5 star score, but the DVD's awful technical quality caused it to be relegated to 3.
Posted by Moshe Reuveni at 1/03/2007 09:34:00 pm
Email ThisBlogThis!Share to TwitterShare to FacebookShare to Pinterest
Labels: Film