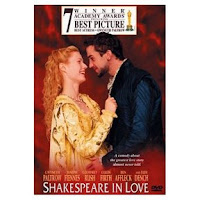 Lowdown: Love is the perfect inspiration. Ask Shakespeare.
Review:
Back in 1998 I liked to hate Shakespeare in Love. This obviously boring film took the Best Film Oscar award away from one of the films I actually still consider to be one of the best films ever - Shaving Private Ryan. I only allowed myself to see this blasphemous film long afterwards.
A lot has changed in me since 1998. As far as Academy Awards are concerned, I couldn't care less about them anymore; by now I'm convinced it's all about the money or the PR, and not about the movie. Otherwise, how can you explain how the most brilliant film of this century, Eternal Sunshine, didn't receive the accolades it deserves? But anyway, I'm straying.
Once I did see Shakespeare in Love at the cinema I really had to admit it was good. Not Private Ryan good, but a good comedy. I remembered it to be a rather clever comedy, and I also remembered it had quite a lot of nudity for a comedy (not that there's anything wrong with that). But eight years have past and it was now time to renew my acquaintances with the film. How does it fair today?
It is still a very good comedy. I wouldn't call it exceptional, because it doesn't send me roaring with laughter the way a truly good comedy does; but it does have several attributes that make it stand above the crowd: a clever story, excellent direction, and a cast of a caliber that is rarely brought together to perform on one "stage".
I'll start with the story. Set in Shakespeare's own time, back in small London town, the film tells us about young Shakespeare - a theater script writer who had some good work but is yet to make his mark on the stage. While writing his next comedy script, Romeo and Ethel the Pirate's Daughter, young Will suffers from writer's block. The only way around that, it seems, is to fall in love; and love finds him in the shape of Gwyneth Paltrow. Alas, Paltrow is to engage a rather materialistic Collin Firth; the fight between them for the mind, body and purse of Paltrow is epitomized in the play that eventually comes out of Shakespeare's quill.
I have mentioned a couple of the actors already, but please allow me to list the actors that truly make this film a pleasure to watch: Geoffry Rush, Tom Wilkinson, Judi Dench, Colin Firth (my favorite here), and Rupert Everett. And I'm sure I've missed a few; not that the main actors, Paltrow and Joseph Fiennes (where has he been to since?) do a bad job.
Overall, the point of the story is pretty simple: Love can take you to higher heights. Love is an inspiration. If you ask me, love is probably a load of chemicals released into your bloodstream that make you do all sorts of things you wouldn't normally do, but then again - what's wrong with that? For now, a person cannot be said to have truly lived without going through these motions several times in his/her lifetime. Please allow me to politely ignore the debate on what makes love better than other chemical drugs, or discuss the prospects for love once its chemicals will be artificially reproduced and consumed; superficial handling of such debates could lead people to think along the lines of "maybe we're better of ignorant, maybe we shouldn't let science discover what love truly is", and you know me - once I'm in anti-flat-earthers mode, I can't get out of it.
That said, the chemical type of love that is often celebrated in films does not tend to last too long, a fact most films (especially those made in America) tend to neglect to mention; this one gets around this problem rather well. And that said, plot cleverness and twists aside, the film cannot be accused of breaking new grounds, ideas wise; it is, first and foremost, a comedy - albeit a good one.
Best scene: Judi Dench's last appearance, which I would spoil if I was to provide any further details here. It probably caused her many a typecast.
Picture quality: You can see this is an older DVD. Details level is low, and there are lots of analog artifacts - of the type you don't see much of in newer DVD's - all around.
Sound quality: Pretty basic other than the occasional climatic moment handled by the score. Overall the amps and the speakers will have an easy day at the park.
Overall: Somewhere between 3.5 to 4 stars, depending on the weighing of the cast against the relatively shallow premises.
Posted by Moshe Reuveni at 1/09/2007 10:56:00 pm
Email ThisBlogThis!Share to TwitterShare to FacebookShare to Pinterest
Labels: Film