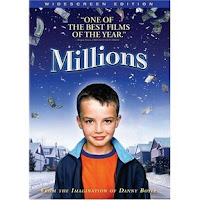 Lowdown: Money can't buy you love, but you can do a lot of good with it.
Review:
I've been searching to rent Millions for more than a year now yet the DVD kept on eluding me; eventually I discovered the video store has filed it under the "Children" section. Go figure; yes, the film stars children, and children will like it, but it packs more punch in the message department than most adult films.
This British film follows two kids who move with their father to a new prestigious housing estate somewhere near a power plant and railway tracks after recently losing their mother. They're trying to cope with their new school: the older by fitting in, the younger one - an imaginative five year old - through his enchantment with Christian saint figures. He simply sees them and thinks about them wherever he goes, including the cardboard house he built next to the railway lines.
One day, while he's busy spotting trains in his man made shelter, a miracle happens: a bag full of money - 200,000 pounds - suddenly falls next to him. He shares the secret with his brother, and both decide not to tell anyone - because the tax authorities will take 40% of it, which is almost all of it.
The rest of the film focuses mainly on how the different characters in the film cope with this miracle that befell the children: some try to use it to establish a name for themselves, other acquire worldly comforts, but the biggest hero is the little kid who tries to use it to help the poor and those in need while various saints keep on making guest appearances and help him out. Eventually we learn the true nature of the money's arrival, and the story develops into a mini thriller, too (interestingly enough, the money ends up being related to a tragic Arsenal defeat to Newcastle in Highbury).
The end result is a lovely film, a true success story, where the main ingredient in the secret recipe is its unassuming nature: the film has this spirit of innocence about it that make it hard to develop expectations, yet when it delivers it's hard not to love the result. The second reason for the film working and working so well is the message it packs: money does not matter, in the grand scheme of things; even when miracles seemingly happen and money falls at you from the sky, you cannot buy yourself happiness. What you can do, however, is stop worrying about interest rates and investment properties and use it instead to make your world and the world of those around you a better world.
Given the wide use of religious connotations in the film, I have to address the question that most of my friends are bound to ask me - how come I liked a film that uses such motifs given my antagonism towards anything religious. First I will argue that the film does not use the things I despise about religion to promote itself; it uses things I approve, such as being good to one another, helping those in need, and not doing unto others what you wouldn't want done unto yourself. There's nothing wrong with that; my argument against religion there is simple: one doesn't need religious excuses to be a good person, thus rendering religion redundant.
Second, it is clear that while the film uses religious motifs, it also mocks organized religion as being a twisted representation of what it's supposed to stand for. This sarcasm becomes quite clear through a side story of a family of Mormons similar in nature to the hero's family - a father with two sons, albeit a bit older than the hero kids. They present themselves as a family that does not seek out the simple easiness that modern life can provide - say, a dishwasher. But when the hero kid stuffs money in their mailbox - 5,000 pounds - they rush into the nearest store and fill up their house with electrical appliances. You can clearly say that the film makers are using this side story to mock what religion currently stands for: a tax exempt institution full with money to the hilt that uses its money for its own sake instead of using it to support the poorer people of this world, the way the hero does with the help of his saints.
If anything, the film has helped me learn a bit about Christian saints and their origin, including Santa Claus. I have to say it made me wonder about the so called monotheistic nature of Christianity given the semi god status its saints have, but that has nothing to do with the film Millions - a film I would highly recommend.
Best scene: The hero 5 year old kid invites a group of poor people he meets on the street to a grand meal at Pizza Hut, his version of a grand meal out. Given my experience with the English side of my family, I can see where that notion comes from.
Picture quality: Too many digital artifacts, a picture that's a bit low on detail - mainly due to high contrast filming - but overall most of it doesn't look bad at all.
Sound quality: Some scenes offer a pretty intense sound, but most of it is on the polite side of things. Not bad, overall, for a film filed under the "Children" section.
Overall: A surprising 4 star film.
Posted by Moshe Reuveni at 1/10/2007 09:53:00 pm
Email ThisBlogThis!Share to TwitterShare to FacebookShare to Pinterest
Labels: Film