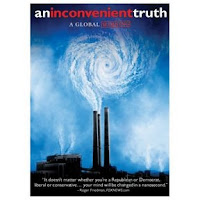 Lowdown: Global warming is not a political issue, it's a moral issue.
Review:
Referring to An Inconvenient Truth (AIT) as a film qualifies as being a bit unfair to the art of film making. AIT is not really a film: it's basically Al Gore doing a presentation on global warming shot on film. In between, you get a few tidbits on Gore's personal life. Point is, if you want to judge AIT as a film, even as a documentary, it wouldn't score that well; I've seen home movies that are more artistically explorative.
So what can this film be judged upon? Obviously, its message and the way it goes about communicating its message. So what is it trying to say? Well, I'm assuming that by now everyone knows that this film is a concentration of facts to do with man made global warming, the risks it brings upon us, and the need to quickly start doing something about it despite the various stakeholders who wish us to take our time about it so they'd be able to make more money. Note the DVD includes an half an hour long update with even more breaking news evidence showing the general direction the world is heading in.
Which leaves us with the question of how well the film conveys its message, and the answer I can give you is "very well indeed". Al Gore has this reputation for being a pretty boring man; that was definitely my personal impression from his time as vice president, but then again that was pretty much shaped by what others told me about him. In AIT, Gore is anything but boring, though (which is good given the one man show nature of the film). He is funny, he drives his message through in a very well paced manner, and overall he is pretty charismatic. One can easily see he is truly passionate about his message. It is all very effective: once you hear what he has to say any doubts you might have had about whether to "believe" in global warming or not would disappear. And just in case they don't, Gore brings forward plenty of evidence in the form of video clips and photos allowing viewers to also see that global warming is here with us.
Overall, AIT does incredibly well in pushing ahead the message of awareness to global warming. But, is it perfect? Well, it's good; and in many ways it is better than the book, simply through the use of moving pictures in order to make certain points clearer. Alas, the constant use of eccentric American units of measurement - pounds, fahrenheits - make it hard for someone used to the metric system (e.g., me) to accurately follow some of the things Gore is trying to say.
Another annoying element in the film are the personal story transitional scenes glued to the film at various key points. Sometimes they are interesting, other times they help the message's cohesiveness, but most of the times the attempt to deliver a personal face with the message just detracts from the quality of the message as an important one that is bigger than about just one person, almost president or not.
Don't get me wrong, though: AIT is a very good film; it's deficiencies are very slight compared to its excellence in delivering its message. If you look at it through the Carl Sagan index, a film that quotes Sagan twice (at its beginning and at its end) cannot be a bad film.
Best scene: The explanation on how CO2 and temperatures relate to one another is very well done; it's uplifting to see science delivered so effectively to the masses. It made me feel like I'm watching an episode of Cosmos.
Picture quality: This is not a film to look for picture excellence in. Not that its bad; it just does not attempt anything in the suspension of disbelief department. That said, the picture is pretty good, although highly varied given the large amounts of clips glued together here.
Sound quality: Again, it doesn't really matter. The lecture room ambiance is well delivered and the speech is very well recorded - extremely clear. That said, some of the sound effects added on top of the clips - say, ice breaking off mass structures in Antarctica - sounds very artificial.
Overall: While this is not a proper film, it is a deserving candidate for being one of the most important films you'd ever watch. 4.5 stars: every citizen of this planet should watch it, and if they still fail to see the light they're either well trained politicians or simply insane.
Posted by Moshe Reuveni at 1/27/2007 06:27:00 pm
Email ThisBlogThis!Share to TwitterShare to FacebookShare to Pinterest
Labels: Film