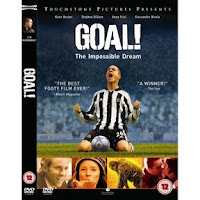 Lowdown: Cliches are having the time of their lives in this "making the American dream come true - the football way" story.
Review:
You would think a film about football cannot be too bad. After all, it has football in it. You would think that a film about football featuring some real footballers and real clubs and real setups has every right to be good. But you'd be wrong - because a film about football first has to be a good film, and Goal! is not a good film. It is entertaining, but there's a difference between that and being good.
The story is simple: A Mexican family crosses the border to become illegal immigrants living in LA. Years later, they all work in gardening rich people's gardens; but there's this guy, Santiago Munez, who also plays football after work, and he's quite good at it. One day Santi has the luck to be seen by an ex Newcastle United footballer who also has a history as a scout [to the ignorants amongst thee, Newcastle is one of the English Premiership football clubs that everyone respects but never manages to get any real titles; not because of any lack of passion, but mostly because of a lack of cash].
The scout manages to sort a test for Santiago in Newcastle as long as he gets his butt over there; and that's where this continuous spiral of cliches start, with Santiago first having to battle his father in order to get to England; his father, in the devil's advocate role, is of the opinion they were meant to serve the rich and shouldn't delude themselves with any dreams.
Cliches attack you from left and right as Santiago stumbles upon all sorts of hurdles on his way to becoming a fully fledged premiership footballer - let's not kid ourselves, this outcome is never in doubt - including (but probably not in order): telling a lie and then having to face the outcomes; falling in love with someone he's not supposed to fall for according the book, but in reality there's no reason for them not to be together; contending with the temptations that come with status; the death of a close family member; nasty team mates who turn out to be guardian angles; a seemingly evil manager that ends up as a Yoda like character; powerful people looking to spoil him... Excuse me if I haven't listed them all.
There's nothing wrong with cliches, but in Goal! their frequency is just so high you just burst into laughter and/or become annoyed the second the next one shows signs of popping up. They also tend to have a serial nature about them rather than a parallel nature, as in Santiago has to face them one by one and not several of them at once (the way it usually happens in real life when testing times befall us). I assume this was a conscientious choice in order to avoid making the film too hard to follow for some of the typical football fans that might watch this film [for the record, I am one].
The football world is nicely depicted. I have no idea whether its depiction is true to reality - I suspect it's not - but the fact that it's shot in Newcastle on the real grounds with real players adds to the authenticity. Mind you, the action scenes are shot in a manner that is obviously designed to make football attractive to people who don't necessarily know much about the game - and let's call a spade a spade, these people are commonly referred to as Americans. The whole football action bits are very over the top and badly shot as well (if following the game is what you're after, as opposed to following an individual player); even Ronaldinho won't perform in training the trickery that Munez does in a Premiership game. These tricks simply don't work in real life.
All in all, this is a film about the fulfillment of the American dream. Cinderella with a round ball, if you will. And I'll grant it one thing: it's entertaining. But convincing it is not: Munez might be a good footballer, but he never really makes an effort in the film. He gets where he gets to through his natural talent and by using a lot of favors from his friends; not through hard work. Which points at the film's biggest drawback: the story is simply unrealistic.
History shows it pretty clearly: one does not become an overnight success story in the English Premiership without years of hard work accompanied with very good coaching; Goal!'s story is something that can only happen on film.
If there is one film Goal! reminds me of, that would be Top Gun: stupid, ridiculous, mirroring tons of negative values - yet entertaining.
Best scene: It's really hard to come up with such a scene in here, because this is a story of mediocre film making. I'll settle for the scene in which David Beckham makes a guest appearance, as it's one of the film's peaks as far as stretching it is concerned.
Picture quality: Some level of detail is missing, but overall quite good.
Sound quality: Very good, although overall not exceptional. The stadium scenes are quite spectacular.
Overall: 2 stars; as silly as this one is, it is an effective feel good entertainer.
Posted by Moshe Reuveni at 1/22/2007 09:50:00 pm
Email ThisBlogThis!Share to TwitterShare to FacebookShare to Pinterest
Labels: Film

Sorry Moshe, have to correct you with the financial status of Newcastle United. Unfortunately, they're not cash strapped, just seeemingly unable to spend money wisely. £17 million on the perpetually (or so it seems) Michael Owen, £9.5 million on Albert (Spanish international, my arse) Luque, £8 million on Jean-Alain Boumsong, the list goes on. Absolutely correct with your review though, cliuche after cliche! Still enjoyed it though! Typical Newcastle United though, the movie ends with the team qualifying for the Champions League. Can't even win a trophy in the movies!

Meant to say perpetually injured! It's been a long day/week/year!

I don't know about the rest of them, but I was curious about the signing of Owen. Even regardless of a fascinating history of injuries, he didn't seem terribly interested in Newcastle - it was more of a last resort.
With regards to the way Newcastle is portrayed in the film, I think you have to take the sequel into account: in there the hero moves to a proper club - Real Madrid. Now don't let me start with saying what I think of a club like RM, where the wallet is everything.