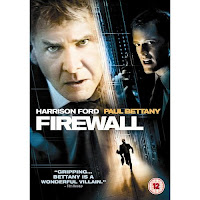 Lowdown: Harrison Ford tearing down everything he helped build.
Review:
Some things mature with age; Harrison Ford doesn't. By far my favorite actor, nothing he has done lately can compare to the stuff that made him legendary. Personally, I would say he should have retired long ago, and definitely should have avoided the Indiana Jones 4 shoot that has recently commenced (according to the papers).
Still, compared to most of his recent work, Firewall is not that bad.
The story is simple. Ford works as the IT security chief at a bank where he helped design all the network security. His credentials in IT security are quickly established in a scene where he utters some highly sophisticated IT gibberish that might be true but is obviously there for its pompous sounding nature rather than its true meaning.
Little does Ford know, though, that evil bank robbers headed by Paul Bettany plan on robbing his bank. They kidnap his family and then use Ford to infiltrate the network from the inside. Ford has to take down what he has helped build before; will he manage that? Will he save his family from the evil clutches of evil? Well, eventually it would come down to who is going to have the upper hand in a fist fight to the death; can conflicts really get solved any other way?
There is an obvious attempt here to make things look and feel real. Techno talk is used, but it's usually at a level that makes sense; and when computers are shown, they are shown with ordinary Windows XP or Internet Explorer screens (I would have recommended Firefox).
Still, as much as authenticity is strived for, the film has a distinct feeling of being made as a patchwork of scenes rather than a film made according to a specific director's vision. For a start, the name of the film has no role in the film itself; the film could have been called "Strangers in the Night" just as well. Then there are several key car scenes towards the end of the film that have obviously been shot in blue screen; these make the film look like vintage Hitchcock without the Hitchcock qualities. But by far the worst is the lack of utilization of key actors that do take part in the film, mainly Virginia Madsen who plays Ford's wife: they could have cast the talents of Paris Hilton and achieved similar results.
While Firewall is quite thrilling and very visceral, there is nothing new about it. You would watch it, you will enjoy it, but you will quickly forget about it. If asked what the film tries to discuss, apart from its literal action, I would say it's the way in which modern humanity faces the threat of the things it has built being turned back on themselves to hurt humanity. That, however, would be a very stretchy guess as the film does not seem to make even the smallest effort in the thought provoking department. Ultimately, Firewall is just a straight forward action film, a modern day Dirty Harry, with not much of a substance behind it.
Best scene: Ford runs away from his IT manager, Robert Patrick (aka Terminator 2's evil morphing killer) in a garage. Patrick runs after Ford's car in a manner not unlike the lift/car hospital escape chase scene from Terminator 2. And yes, the fact my favorite scene is my favorite because it reminds me of another film says a lot about Firewall.
Picture quality: Good, but colors are a bit unreal. They have a distinct NTSC feel about them.
Sound quality: Very good. Directional dialog, tight sound effects you can feel in your gut, and a punchy musical track add to create an adrenaline pumping experience. It's a pity the rest of the film can't rise to the occasion as well as the sound.
Overall: 3 stars for an effective yet totally forgettable film.
Posted by Moshe Reuveni at 1/23/2007 10:37:00 pm
Email ThisBlogThis!Share to TwitterShare to FacebookShare to Pinterest
Labels: Film