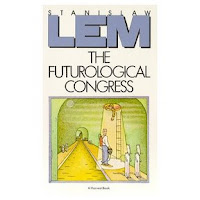 Lowdown: The future is in the shits; let us hide in the sewers.
Review:
Well, here is a bit of a controversial book for you. I read it as a child almost 25 years ago and I liked it.
It told this fascinating story of a guy in a near futuristic earth who goes to this futurological congress where people are supposed to discuss how humanity should face the future, but a revolution transpires to wreck quite a havoc on the congress. The hero ends up fleeing to the sewers, from time to time seeking salvage in some other futuristic world only to find that he was dreaming and that in actual fact he is still in the sewer.
To the 12 year old that read the book, the surveying of potential futures was fascinating, imaginative and thought provoking. I liked it so much I still remembered a lot of details despite the years that went by; quite a rarity for someone who is still surprised the good guys win each time he reads The Lord of the Rings.
Now, the question is what would I think of the book if I was to read it now. After mentioning the book in my personal blog I got to have this opportunity in the form of a birthday gift (thanks, Uri). This time, though, I was to read it in English, which unlike most other cases where I prefer to read a book in its language of origin (as opposed to my native tongue, Hebrew) is not an advantage given that the book was written in Polish. That's communist's science fiction for you.
Introductions aside, did I like the book? Well, yes and no. Mostly no, I am sorry to say (Uri must be delighted now).
I'll start with the positive. The various descriptions of the possible futures provided in the book are described to such an articulate level they are truly the work of a genius. Everything is mixed into the equation, including social, environmental, and technological aspects (to point at just a few). Most notable is the description of a future society in which everything can be acquired by the mind through chemical pills that go directly to your brain to create an alternate reality: you can upload the dictionary into your head by swallowing a pill, as well as purchase an enjoyable tailor made real feeling illusion of how your noisy neighbor is being tortured to death. Personally, I found this culture's reliance on edible drugs to be fascinating: after all, almost all of our religions include some reliance on drugs to promote the divine experience (starting from alcohol and progressing to all sorts of other stimulants). Everything is possible in this future world, until our hero learns that all the goodness of this world is yet another chemical drug; this overpopulated world no longer has the resources to support its population, and in order to keep the masses happy they are kept under a constant dosage of drugs that make them think they are happy.
This is but a slight facet of one of the potential futures the book discusses; mind you, all of them share one common element: they're all pretty bad. This book does not provide an optimistic appraisal of the direction our world and humanity are heading for.
But this pessimism is not the reason why, overall, I did not like Futurological Congress the second time around. The reason for my disenchantment is simple: readability. Or rather, the lack of it.
The book is quite an annoying read: there are no chapter stops, for a start, so it's hard to let go of and pick up on later. Crucial key events, such as the hero waking up from one future to find himself back in the sewers, are hidden as short sentences inside long paragraphs; you read them but it takes time to appropriately digest them. Now, you can say that's my fault, but my years as a student have taught me two things: (a) I may not be an Einstein, but I'm not dumb; and (b) when I don't understand something, it's usually the fault of the lecturer. My point is, the book may be great, but I don't want to spend my time on an unreadable book when there are so many perfectly readable ones out there that are just as good if not better. A lack of clarity should be punished, not awarded or admired.
And yes, there's another thing I don't really like in the book: This repetitive thing with constantly waking up to find that whatever took place was just a dream is too cheap a technique to write a proper book with. I'm sure one can think of a better way to transition from one scene to another.
Overall: Zero bullshit tolerance. 2 stars.
Posted by Moshe Reuveni at 1/28/2007 06:20:00 pm
Email ThisBlogThis!Share to TwitterShare to FacebookShare to Pinterest
Labels: Book

I am delighted.
I have mixed feelings about Lem in general, but this was a book I just hated.
Maybe I should read it again just to see if I still feel the same way.