As this blog is now celebrating its first birthday, I thought I should do a regular yearly awards thing to celebrate the stuff I have enjoyed the most. So here goes - the best of what I've seen or read during the year that was, the R-Wards.

Best Film: This R-Ward is given to the best film I have watched for the first time during the previous year. There were two contenders for the crown: Inside Man and Children of Men. The fact neither won particular acclaim from the establishment goes to show one thing or two about what I think of the establishment, but I'll leave it with that for now.
Overall, Children of Men is my winner, mostly because in a globalized world going through all sorts of breakdowns - global warming, terrorism, etc - it is a very relevant film. It is also a film I will remember as the source for the name Dylan.

Best Book: It is interesting to note that in general, books have received much better reviews than films in my blog. I suspect the main reason is that I am much more selective with books, given that they represent a higher investment as far as time is concerned. But I also feel that some of it has to do with the more intensive experience that is reading.
Two books I have read this year for the first time stood head, shoulders and crotch (for all it matters) above anything else. Interestingly enough, both were written by one Richard Dawkins. The first is the recently published The God Delusion, a book that involved a methodological dismantling of this thing called religion for the farce it is; the second is a book published 30 years ago called The Selfish Gene, which gives a pretty thorough answer to the question of why we are here and what we are here to do, as well as explain how and why we go about doing things. The icing on top of the Selfish Gene's cake is the new edition's chapter on why being nice and forgiving to one another pays off, which works well in settling the turmoils created by the book title (which caused a lot of anguish with people who read the book by title only).
So which book is the better book? There can be no doubt of The Selfish Gene winning by a knockout here for substance. However, the better written and more enjoyable to read The God Delusion reaps the R-Ward: published this year, it is very relevant and is "in the air".
Regardless of which of the two won, I think I can safely say Richard Dawkins has won his place in my head.

Best Review: This is a category where I pat myself in the back for writing a good review. As it has been my purpose to review anything I watch or read, it is hard to imagine I would be able to sustain good quality reviewing throughout; there were obviously ups and downs, mood variations, stuff I didn't have that much to say about, and times in which I didn't really have the time to write a proper review. It is also interesting to note that after a while I noticed the better reviews come when I take a while before writing the review, as opposed to getting to it immediately, as this allows things to digest in my head.
Anyway, there are several reviews I'm particularly proud of, but the one I like the most is the one where I have made a conscious effort to write a good review and actually think I fared very well. And so this R-Ward goes to me, for reviewing The Selfish Gene. Given its qualities, no other book or film deserves a well written review than The Selfish Gene. 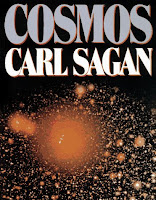 Lifetime Achievement R-Ward: This R-Ward goes to whatever I liked the most which I have seen this year but not for the first time. While I have watched many repeats during the year, in my mind there can be only one winner.
Carl Sagan's Cosmos has entertained me many a time during my teens, but when I watched it again this year I was surprised to see how much more I can learn from it and how complete Sagan's presentation is.
Dare I say it's the best thing ever to grace my TV? I sure do.


Now for the future. With Dylan around, I doubt I would be able to repeat last year's collection of more than 150 reviews; I don't know many who could muster that on their own. I did enjoy it, though, and more importantly I did gain some new friends through the dialog created by these reviews. Through my reviews conclusiveness, one can get a glimpse of what my life was like during the past year. But with that said, I suspect the year to come will be a rather bleak one as far as reviews are concerned; I will probably only get to see the major blockbusters this year, rather than the really good hidden gems. Somehow, I don't think something like The Transformers deserves an R-Ward. But still, I shall let time do its trick.
Till next year...
Posted by Moshe Reuveni at 7/29/2007 04:49:00 pm No comments:
Email ThisBlogThis!Share to TwitterShare to FacebookShare to Pinterest
Labels: R-Wards
Newer Posts Home
Subscribe to: Posts (Atom)