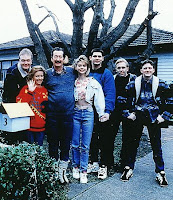 Lowdown: Nothing can come between an Aussie and his real estate.
Review:
If asked what is the most representative of Australian films, most people would probably answer Crocodile Dundee. I know I would. However, after watching The Castle, it is obvious most people have got it wrong, for I have never seen a film that manages to capture the spirit of its people so well as The Castle. It is, by far, the most Australian film I have ever seen.
It's basically a simple, predictable, happy end type comedy about a rather naive family guy heading a rather dyslectic family. They all live happily right at the edge of Melbourne airport's runway, until one day they receive a notice that as some big company wants to expand its airport operation and thus they are forced to sell their house. But the family guy won't give up: he recruits his unlikely group of neighbors and his conveyancer into a legal fight against the big companies trying to steal his castle away from him. And as this family guy is pure of heart, he manages to touch the right cords in the right people and - here's one spoiler that will not surprise anyone - win the day.
However, the plot is not the main event with this film; it's all about the Australian way of life. The examples are so numerous I can't count them all here: The affection Australians have to real estate, their devotion to their home with endless grooming and extending and renovating, their love of their cars in their own particular way, their love for a bargain, the co-existence between "real Australians" and "bloody immigrants and wogs", the simple/boring food most of them eat, the chauvinistic way in which they "adore" their women while comfortably locking them up in the kitchen, the very relevant way in which big companies are threatening the Australian way of life... But most of all, it's about that famous "no worries", dumbed down attitude Aussies are so famous for; it's charming, but it can also drive you crazy: everything is done with a smile on the face, only half seriously; the film is full of foul language, but you never feel as if it's an issue.
Another surprise is Eric Bana appears in a little role as the Greek son in law; the guy's just great with the way he acts and the way he talks truly matching the character.
However, as charming as the film is, it is also too shallow and too predictable to merit a truly serious appraisal. This is a film that winks at you and makes you laugh, and it does that well, but no more than that. It is, however, the quintessential Australian film experience.
Best scene: The introduction to the family members at the beginning of the film quickly establishes the film's mood and the film's sense of Australianism.
Overall: 3.5 stars.
Posted by Moshe Reuveni at 12/05/2006 10:25:00 pm
Email ThisBlogThis!Share to TwitterShare to FacebookShare to Pinterest
Labels: Film

We just finished watching The Castle again, and I couldn't avoid noticing how much it related to Australia's vibe (to quote a word used a lot in the film).
I liked the scene where the neighbor reports that because he's an Arab everyone always thinks he's going to bomb them.