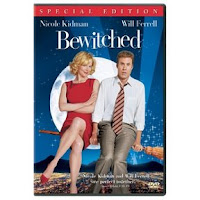 Lowdown: Falling in love is just as hard for a witch as it is for mere mortals.
Review:
I am not a big fan of Nora Ephron (Sleepless in Seattle, You've Got Mail) to say the least; had I known Bewitched is a film of hers I doubt I would have spent an hour and a half of my time with it. But I did, and I have to say I am as much of an Ephron fan as I was before.
The film follows Nicole Kidman, a witch from a family of witches and warlocks who can get her way around anything with a wiggle of her nose or a tweak of the ear. Nicole is unhappy with immediate yet superficial gratifications, so she decides to retire from witchcraft and settle in Los Angeles. Alas, fate gets her to bump into the producers of a remake for the old Bewitched series, and guess what - she fits the role of a witch like a glove.
Then she falls in love with the lackluster co-star of the remake series, Will Ferrell, but things go the wrong way when Ferrell uses Kidman to advance his own failing career and later when Kidman, who finds quitting witchcraft is just as hard as quitting smoking, tells him their relationship was based on incomplete truths and that she is, in fact, not "just" an actress witch. All the while, we have the background story of Michael Caine - Kidman's warlock father - love affair with Shirley MacLaine, who plays the witch's mother in the remake.
The story's point, I guess, is that ultimately we are all witches and warlocks when it comes to relationships; we just need to get our act together, accept each other's deficiencies, and learn to trust and expose ourselves to our loved ones. However, this is far from being well told; the plot progresses along rather awkwardly, and the film serves mainly for Ferrell to perform his usual absurd theater acts rather than making the point; and it's not like his acts blend well with the film, they are way too far out there.
Ultimately, we have ourselves a film that is mostly a waste of time and talent: The talents of Caine, MacLaine, and mostly Kidman. Yet another patronizing love affair story from the Ephron production line; as usual for her, laughs are very rare and subdued, even though it's supposed to be a comedy.
Best scene: Clips showing Ferrell's previous acting failures provide the film's funniest bit.
Overall: 2 stars.
Posted by Moshe Reuveni at 12/29/2006 11:39:00 pm
Email ThisBlogThis!Share to TwitterShare to FacebookShare to Pinterest
Labels: Film