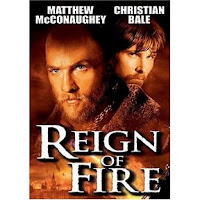 Lowdown: In the near future, dragons have taken over the world and humanity has been reduced to a refugee status. Until people discover they can fight back.
Review:
Some films are just so bad they're good. The best example I can come up with to demonstrate the notion is Top Gun, a film celebrating pretty much all that is bad in modern culture in such a serious way you can only laugh at it. Reign of Fire is not as bad, but it certainly qualifies as a film that's just so bad you enjoy it, in a perverse kind of a way.
The film's main problem is that it simply doesn't make sense. While digging underground in modern day London, diggers suddenly stumble upon a big chasm which turns out to be a dragons' lair. Yes, you've read it right. The dragons emerge to conquer the universe, and humanity is helpless in its war against them: even nuclear weapons don't do the job. As civilization falls apart, scientists discover - all too late - that it was the dragons that made dinosaurs extinct and that it was dragons that caused the occasional calamity to life on earth in general. The world is reduced to dust, and 30 years after dragons first emerged there are no more cities or anything like that, just small groups of refugees doing their best to survive: they do crops, hiding them to prevent the ash eating dragons - yes, ash is very nutritious if you're a dragon - from burning it for their consumption; they even invent religions to get their kids to properly behave in the face of the dragon threat.
The film follows a colony of refugees living somewhere in northern England (or southern Scotland?), and led by Christina Bale. Life is hard for them, and then one day a group of American soldiers led by Matthew McConaughey knocks on their door; at first they're afraid of potential looters, but soon they join forces as they realize that McConaughhey has figured out a way to fight back and win the war with the dragons.
I do have a lot of patience towards dragons and fantasy; I used to be a big fan. But Reign of Fire goes way too far as far as credibility is concerned. You could think that maybe the concept here was to warn us of a danger we might expose through something that we're doing today that could be the end of civilization as we know it: maybe global warming, or perhaps the tinkering with our genes. However, I suspect the explanation is much simpler: the directors looked for an excuse to make a semi horror movie featuring dragons as the main event of a special effects laden meal.
What they ended up with is very stupid, often thrilling, but also quite funny. Especially when you watch a bald McConaughey that is hard to recognize with all the makeup on running around with breathing sound effects and a voice that make him sound like a Darth Vader.
Best scene: The refugees recreate the famous "Luke, I am your father" scene from Empire Strikes Back to their kids as a bedtime story. Not that this line of thinking is that original, it's just that the film is overall lacking in originality or creativity.
Picture quality: This THX certified DVD features excellent picture quality. A lot of it is dark, but you don't see much if any in the way of artifacts.
Sound quality: Quite good, although not world class. Effective surround envelopment.
Overall: 2.5 stars, most of which because the film is ridiculously funny.
Posted by Moshe Reuveni at 12/16/2006 10:51:00 pm
Email ThisBlogThis!Share to TwitterShare to FacebookShare to Pinterest
Labels: Film