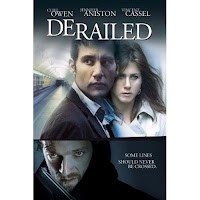 Lowdown: A guy unsatisfied with his life pays a price when he sets out to have a bit of an adventure on the side.
Review:
What is it with films that just don't make sense? How come the filmmakers can't notice it while creating the film?
Derailed tells a story revolving around Clive Owen, who at the moment is probably my favorite actor - the one I would cast today to play Indiana Jones. Owen is a high flying advertising guy living with a beautiful wife, a daughter and a dog in a big house at Chicago's suburbs. Owen's daughter is sick with a rare disease, reflecting on Owen's lack of satisfaction with his life.
One day, on the train to work, he finds himself confronted by a conductor with no ticket and no cash. He feels doomed, but then he's saved by Jeniffer Aniston, who pays for his ticket. They start chatting, and then one thing leads to another - they end up in a dodgy hotel room late at night, about to betray both their marriages. Suddenly, someone breaks into the room, knocks Owen out and rapes Aniston. The horror doesn't end there, though: that criminal then sets out to blackmail Owen, threatening to let Owen's wife know what's going on.
The story continues to develop from this point onwards in a very Cape Fear like manner. Owen seems to be doing every mistake possible in his handling of the issue, and things just look bleaker and bleaker for him.
Overall, Derailed is an effective thriller - you're really thrilled while watching it. That said, it is not a particularly good thriller. For a start, it is very predictable; you've probably watched enough films with a twist to smell them coming your way in Derailed and take the surprise factor out of the equation.
But the worst thing about Derailed is that you simply can't believe the things that go on there. Owen's continuous film noir like tragic mistakes may be tragic and may plummet him down a bottomless pit, but they do not really make sense; Owen is supposed to portray the ordinary man we can identify with, but his actions are more ridiculous than ordinary. You sit there watching the film and you don't believe Owen is doing the things he does. I don't want to give away too much and ruin the film for you, but it is simply hard to believe a person would do the things Owen does in his situation; and the problem is the movie relies on his actions, most of which consist of him telling more and more lies that entangle him, to drive the plot forward. It reminds me of those cheap romantic films where the hero tells lies to get the girl and then has to fight his way back when she discovers he was lying, only that Derailed pretends to be a more serious attempt.
Overall, the movie - aside of being a thriller that tries to surprise you - is a story about the breakdown of the American household to the point where people have it all yet they are still unable to appreciate what it is that they have; only when they stare outside and get burnt do they realize how well they were doing. Now, I have toured the USA to one extent or another, but I cannot claim to know how people live their lives there (and I suspect there's more than one way for them to be doing it, anyway); but the image you get in most contemporary American films is an image of people living in huge houses with huge rooms and a huge backyard, with kids and a dog to add up to their American dream, yet they are dysfunctional as a family unit: the husband doesn't talk much to the wife, and both are in a race to satisfy work and financial demands while trying to tackle the "problems" caused by their kids. Given the repetitiveness of this concept in a great number of films, I suspect this disillusionment process with achieving happiness through material acquisition is an issue on a lot of people's minds.
Best scene: At the start of the film we see Owen in his bedroom waking up in the morning. He stares to the side to see his good looking wife having a shower (sadly there's no nudity there), but you can see by the expression on his face that he is as excited about seeing here as one would be when they receive a parking ticket. The scene establishes the film's premises quite well.
Picture quality: This is a DVD done bad. Colors are all over the place and vary from scene to scene, and there is noise aplenty.
Sounds quality: Nothing spectacular; pretty standard for an American film, which is not too bad.
Overall: As much as I like Owen and as much as I think he does a good job with his character, the script is simply too unbelievable. 2.5 stars.
Posted by Moshe Reuveni at 12/17/2006 10:52:00 pm
Email ThisBlogThis!Share to TwitterShare to FacebookShare to Pinterest
Labels: Film