Movie: Flags of Our Fathers 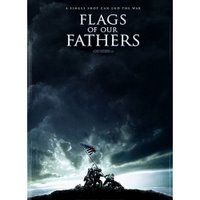 Lowdown: Regardless of expense, marketing people will even sell you a war if money is needed.
Review:
I think I can safely say that Clint Eastwood is my favorite contemporary director. I like him so much that we even left our home theater behind, and after a few months' gap went to the cinema to watch his latest film.
Flags of Our Fathers, besides having a less than catchy name, is a film telling us three different stories, interwoven together through flashbacks. The first is the story of a marine unit taking part in the first round of the bloody Iwo Jima fight; the second is the story of how three soldiers from the unit, who just happened to take part in raising the American flag over Iwo Jima (in what became a very famous photo) are taken around the USA as heroes in a tour aimed at raising money for the war effort; and the third is the story of the son of one of those three soldiers, as he explores and learns about his father's history.
The first story pretty much tells us that war is hell. The second and the third explore the meaning of heroism, as Eastwood forces ask to ask who is the hero - the person who fought and died to help his friends or the person who just happened to be at the right place in the right time to stick a flag to the ground when a photographer just happened to be around to take a sexy photo. Eastwood even gives us his answer to the question as the film ends, but I won't disclose it; I will just say that in my view, as a person that doesn't believe in symbols of any kind, the term "hero" is quite a loose one. I would tend to use it to describe people who do the right thing, as in doing their best to support others and do what is morally right. Obviously, "morally right" is a rather loose term, which is probably why Eastwood bothered to make a film out of the subject; I will just conclude this discussion by saying I think most of us, people who live a decent life through the normal routine of earning money and supporting our families and friends, are heroes in my book. They don't kill baddies, but they do what they have to do; and people like single mothers, for example, are major heroes.
Further links between the cynical use of "heroism" in advancing capitalist goals are heavily hinted at by Eastwood. But let's go back to the film and ask: Does it work? Did Eastwood ring my bell again?
Well, to put it short, no; I think Flags is the worst Eastwood film I've seen for probably 20 years.
For a start, it's not that original. The war scenes are pretty much Private Ryan reincarnated, even to the monochromatic filming; the main exception is the extra gore in the form of showing what shelling does to bodies.
Then come the flashbacks, which I found very distracting. You manage to immerse yourself in the film, and then all of a sudden you're flashed back to another plot and have to re-immerse yourself.
But the biggest fault I found in the film was its presentation. To focus my complaint, I would say it was the sound: it was so un-involving I can't see how anyone would take into the suspension of disbelief with this film. That said, the fault could be with the cinema and not with the film; we have grown so used to the quality of presentation in our home theater that maybe we over spoiled ourselves.
Best scene: The scene where the famous flag is put on top of the mountain at Iwo Jima. The scene is so mundane, showing events that were put into American myth to be nothing more than sticking a pole to the ground, it's amazing; compare it to the equivalent John Wayne film and you can easily see Eastwood greatness in conveying us messages at the risk of carrying the wrath of his own nation. And I thought Eastwood was a capitalist!
Overall: 3 stars; I wonder if that evaluation would change when I watch the film at home.
Posted by Moshe Reuveni at 11/06/2006 11:18:00 pm
Email ThisBlogThis!Share to TwitterShare to FacebookShare to Pinterest
Labels: Film