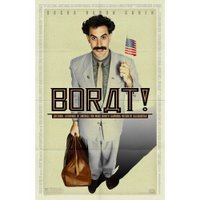 Lowdown: An over-hyped version of Jackass with some little wise insight on human nature thrown in between.
Review:
"You just got to see Borat". That's all you can here lately from people you just bump into with whom you are not familiar enough to hold a proper conversation. And I got to admit it, I like the Borat bits from the Ali G show, and this is definitely the type of film where the inferior presentation at the cinema doesn't matter that much but being around a large crowd of people does support the laughter. So off we went.
In case you just came from Venus or Mars, Borat follows the adventures of Sacha Ali Baron G Cohen Bruno (aka Borat), a patriot Kazakhstani reporter - who also just happens to be a racist, chauvinist and an anti-Semite - as he is sent from his poor village in Kazakhstan to do a documentary on the USA. While there he quickly falls in love with Pamela Anderson, which then sets him on a road voyage through southern USA to California in order to meet his love. In between, we get to laugh a lot. We really get to laugh here; this is not your ordinary comedy, this is a laugh pump.
Laughs, however, can be sorted according to three categories. The first is where Borat says something that really shocks the system of any person brought up with something close to normal Western values, such as "this is my sister, the number one prostitute in Kazakhstan" (insert proud smile). Most of the anti-Semite jokes fall under this category.
The second laugh type is when Borat performs some Jackass like stupid tricks, such as chasing a chicken let loose on a New York subway train, or runaround in the nude - in public.
I refer to these two laughter types as cheap laughs, since there's nothing wise about them: anyone with enough guts to do some nasty stuff to himself and to others can achieve those laughs; there is no real creative thinking with them. These two types are quite abundant in the film. Sometimes you even get a mix of the two types together, as when Borat says and does stupid things. I actually got an extra laugh from his Kazakhstani speeches, which are actually in Hebrew; some times they are properly subtitled, sometimes they are not, but most of the time they are just gibberish.
It's the third laugh type that really makes the film what it is: the type where Borat meets genuine people who have no idea they are taking part in a comedy - people who really think Borat is a reporter from Kazakhstan - where, through his eccentric Kazakhstan like behavior, Borat makes them say or do things they would normally not do in public. To make it clear: they expose an aspect of themselves they would normally hide. There are several good examples for such laughs in the film, but not as many as you would think given all the hype the film has been receiving: a rodeo crowd exposing their real thoughts on Muslims and Arabs, a group of youths that long for slavery to make a return, and an evangelistic church crowd behaving like a bunch of lunatics from another planet are the best examples I can give. Sure, Borat meets many others and tries to get them to slip: some people at a dinner party and a group of feminists to name two - but most of the laughter there comes from Borat rather than the people he meets; it's mostly laughs of the first type.
But when it works it works, and Borat provides some smart and careful insight about the nature of humans (albeit not particularly encouraging insight). Many I've talked to dismiss it as "obviously, he's dealing with dumb Americans", but I think this is exactly the attitude Borat is criticizing when he makes us cringe as we laugh at others making a fool of themselves with their big mouths; those that dismiss Americans are just as foolish as the people Borat exposes for idiots on the screen.
There's more to the film than this. Baron Cohen's overall criticism at the American/Western way of life, portrayed throughout the film with many examples - the chase after Pamela Anderson vs. the film's conclusion, Borat getting an iPod while his jealous neighbor gets an iPod Mini - has a lot of wise insight in it. The fact the entire film is shot "reality TV" style as we follow Borat's adventures, when we know perfectly well Borat is not real, is yet another way for Baron Cohen to tell us something about ourselves and the shaky foundations of our comfort zones. But those elaborate insight are very much eclipsed by the laughter moments; as you get out of the film, it's hard to think of those in the face of all the rest.
Alas, I felt like there are not enough good and insightful moments to the film. There is, however, too much cheap slapstick, a lot of which in pretty bad taste and usually at the expense of innocent others (including Pamela Anderson) - enough to counter the wiser insight and ruin the ratio of good material to bad one. I have to say I was also a bit disappointed with some of the better parts already shown on air in the "Ali G in da USA" TV show.
Worst scene: Yes, since I've mentioned the better scenes already, I'll mention the worst one here. Basically, it involves Borat's head being buried in a naked fat man's ass. Yes, you read it right. The scene is a part of a relatively long wrestling in the nude match between the two.
Overall: There is a lot of good stuff in this film, but not enough to outweigh the bad. 3 stars, but you are guaranteed to laugh a lot.
Posted by Moshe Reuveni at 11/28/2006 09:44:00 pm
Email ThisBlogThis!Share to TwitterShare to FacebookShare to Pinterest
Labels: Film

what separates Borat from other gross-out cuss-out comedies like South Park is that despite the fact that Borat is a racist, misogynistic anti-Semite, he's actually quite lovable. i felt engaged by him in a way that i don't with other comedies of the same nature.

two things, Mr. Moshe. the cheap slapstick at the expense of Pamela Anderson is not really to be lamented, since she HAD to be in on the joke. if she wasn't, Cohen would certainly be in jail. and you referred to the church Borat goes to as "evangelical," but that's not entirely true. it was Pentecostal, and that's a small subset of evangelism. all Pentecostals are evangelical, but not all evangelicals are Pentecostal. many of the things we see the church-goers doing in the movie are things only Pentecostals do. personally, i'm a Christian, and the Pentecostal faith scares the living crap out of me. the most telling thing was that for the first five minutes of the scene, Borat didn't have to say a word. the Pentecostals looked completely ridiculous all by themselves.

Mr. Particle (just had to say it), thanks for expanding my horizons with regards to evangelical movements. Like you, both my wife & I have found the church scene to be scary and for similar reasons (and unlike me, my wife is a Christian).
I cannot say I was engaged by Borat as a lovable character. He's funny, but he's closer to scaring me with his acts than to make me identify with him. He's too extreme for me; that said, I'm no big fan of South Park (to be mild).
With the Pamela Anderson stint, I suspected some foul play; but on the other hand, Borat does numerous arrest-able offences throughout the film. I'm wondering how he didn't get shot on several occasions.
Anyway, we seem to agree that Borat is a very thought provoking film. I think as far as contribution to society is concerned, the film is a major achiever as an eye opener; I do pity some of the more innocent bystanders in the film, such as the people at the dinner party who tried to make an effort for Borat and whose words or actions cannot be condemned by anyone for being bad or nasty.

but for every innocent bystander, there are probably two people who deserved every ounce of skewering they got. it makes me think of the lawsuit leveled against Cohen by the frat boys. i hope the judge laughs them out of court and says "take it like a man; straight up the ass!"

not that you asked for my input, but i don't think you should let the fact that you find "the church scene to be scary" dissuade you from spirituality altogether, especially since your wife is a Christian. obviously you've seen that Christianity doesn't produce fanatical freaks ALL the time. :-) after all, it's just the Pentecostal church that freaks me out, not the church at large. finding a church is kind of like going to a department store to buy a pair of pants. sometimes you need to try on lots of pairs to find one that really fits. :-)

I still have a problem with the abuse of the "innocents" in order to make the point about the "baddies" element of the film, but that's a discussion that we could fill books with. If I was to be one of the "abused" I would probably approve of it given the context and the overall statement made by the film.
And besides, the film was already made, and I fully acknowledge its importance as far as providing us with an eye opener as to who we really are. We're in total agreement there.

With regards to the religion/spirituality issue: I'm probably one of the least spiritually inclined people in this world, but I again I agree with what you're saying: most of the people I know are into religion, to one extent or the other; and the vast majority of them are very decent people. At the end of the day it is that which is important, not their denomination (or lack of).