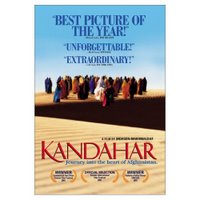 Lowdown: Afghanistan is one tough place to live in, especially if you're a woman.
Review:
Compared to my regular feed of films, Kandahar is truly unique: An Iranian film quite low on production values and actors that stand no chance at next year's Academy Awards. Still, the film is quite unique.
The story is about a Canadian woman whose family left Afghanistan when she was a small child, leaving her sister behind. She receives a letter telling her the sister is about to commit suicide, so she goes to Afghanistan to try and stop her. Thus we get what is basically a journey through Afghanistan as a result: the film is not really plot driven but more of a collage of scenes from Afghanistan, most of which are pretty shocking.
We follow the woman as she enters Afghanistan by pretending to be the fourth wife of a guy and his family, returning home from Iran. On their way "home" they are robbed; the so called "family" splits, and the heroine takes a child that was expelled from school as her guide to take her to her sister in Kandahar. On they go, encountering all sorts of calamities: doctors that won't talk to women patients directly, and won't even look at them other than through a hole in the wall; a red cross station specializing in foot prosthetics for land mine casualties; and a wedding procession that is more than meets the eye, to name a few.
All of which give you a lasting and seemingly authentic impression on life in Afghanistan: everything is pretty bad, and women are even worse than bad. If there is one thing you will take from this film is the way the women's burkhas dehumanizes them.
The film is quite effective and works well despite many deficiencies until it reaches its ending. Now, for the record, I am not the type of person to complain against a non-happy ending; on the contrary, I think that since all things must die a happy ending should usually be the exception as it is unreal. That said, I would like my films to have an ending, and Kandahar simply doesn't have one. I assume this is a deliberate act, a symbol for what Afghanistan is at; but I still don't like it.
Best scene: Each of the various incidents the film depicts is uniquely interesting. The one I like the most was the scene in which women were applying lipstick under their burkhas, showing that regardless of whether anyone can see the makeup they still need it there to feel human.
Overall: Somewhere between 2.5 to 3 stars, depending on how forgiving I am to the ending.
Posted by Moshe Reuveni at 11/11/2006 11:49:00 pm
Email ThisBlogThis!Share to TwitterShare to FacebookShare to Pinterest
Labels: Film