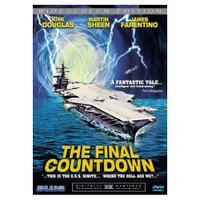 Lowdown: What would you do if you were in charge of America's current most powerful weapon and you were given the chance to sort World War II up?
Review:
The Final Countdown is a 1980 film I first watched at the age of 9 under the name of "The Nimitz is not answering". At the time I was crazy about planes, and an aircraft carrier was a magical world to me, the way Disney Land is to most children. This film has shaped a lot of my childhood dreams.
Obviously, a lot has happened in the 26 years that passed since. For a start, four years in the army have diluted any respect I might have had towards anything that is even remotely associated with the military and with expressions of power. I was therefore very curious to see how this film would look to this current beholder.
The Final Countdown takes us abroad the modern day American aircraft carrier Nimitz, which at the time the film was made was the world's biggest ship that is not a tanker. Some weird storm takes place, and while the Nimitz is busy sailing off its port - Hawaii's Pearl harbor - it suddenly finds itself in the eye of the storm, after which it is suddenly faced with total silence.
At first it seems as if World War III has taken place; but soon enough reconnaissance photos, radar input and radio transmissions all found indicate one thing: The Nimitz has went back through time to the day before the Japanese attack on Pearl Harbor (that's 1941 for you). And the question on everybody's mind is: What should we do?
I like the classic science fiction time-line dilemma, and in The Final Countdown - much like in my all time favorite Terminator series (I'll ignore T3) it gets some proper treatment.
At first you're exposed to the extreme differences between the periods: you see Japanese Zero planes have themselves a dogfight with F14 Tomcats. This scene could only be conjured in the mind of a child playing with his toys, and indeed it has been the stuff of many a dream of mine. Think about the power at your hand! To this day I still find myself thinking how far would one man with an M16 go back in the days of Rome; or whether a modern tank could win World War I single handedly.
Then you get the second layer: The debate of the Nimitz commanders (Kirk Douglas and Martin Sheen) on whether the future of World War II and the future of America should receive a second chance or whether the Japanese are to be allowed to do Pearl Harbor "again". On one hand, you get the chance to fix all the errors of the past; on the other, who knows where you'll end up in. World War II took the USA out of the depression; what would have happened if it was never to take place as far as American economy is concerned? Would the USA be the powerful entity it currently is? Would the Nimitz ever be built?
And then there are hints towards the third layer, which sadly is played around with but never really gets the treatment it should receive: Regardless of fantasy like concepts of time travel, if any of us was to get the chance to fix the errors of his/her past, should he/she do it? Or should we allow ourselves to learn from the past? Personally, I don't believe in delving in past events too much; yes, we should learn from them on how to improve the way we act in the future, but no - we shouldn't mourn or celebrate past events too much, because most of what has happened to us was controlled by things out of our own hands. It appears as though the film makers agree with me on this lesson in the philosophy of history.
Overall, I liked the film a lot. I found the military stuff funny, because it's so foreign to me now, having left my military background half a world away behind me. But with all my contempt towards anything that is army related, I cannot fail to admire airplanes - they are the most glorious of man's creations. Sadly, the fact that man's most glorious creation are agents of mass destruction says quite a lot about this world of ours.
Best scene: I can't help it - the dogfight between the F14's and the Zeroes is one mean scene.
Overall: A silly action film on one hand, a philosophical film on the other. It got to me; 4 stars.
Posted by Moshe Reuveni at 11/13/2006 10:57:00 pm
Email ThisBlogThis!Share to TwitterShare to FacebookShare to Pinterest
Labels: Film