DVD: Talk to Her 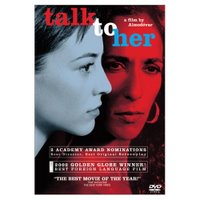 Lowdown: Follow the unique story of two men who take care of their vegetable state female love subjects.
Review:
Most of the films I watch come from Hollywood. Most of them are not that good, but I still find them easy to watch. Often enough I watch an American film which has no chance of satisfying me, just because I know it's going to be light on the digestive system; two hours of easy pleasure to clean the head with.
Spanish films, like their European counterparts the French, usually don't fall under this category. They usually require a more active viewer as they are more subtle; they also tend to have less aspirations into making bold statements, often being reserved and encouraging the viewer to think about what went on. In doing so they are usually much more effective at message conveying.
They do reward the more tired viewer with acres of flesh. I find it weird that American films do not hesitate to display blood and gore, but they definitely hold back on the exposed flesh; European films tend to do the opposite, and in that I am totally with them.
Almodovar is one of the more famous representatives of Spanish cinema. The last I've seen of him was All About My Mother, which I have watched more than five years ago. It was good but it wasn't the type of film I would praise; however, with the passage of time I feel I have become better prepared for the Almodovar experience, so I gave him another go with Talk to Her.
I wasn't disappointed.
The film starts when we watch two man watching a ballet. The ballet is weird: it features two scantly clad women running around a stage full of chairs with their eyes closed; in order for them to avoid crashing into the chairs, a man is observing them and clears the chairs out of their path. That opening scene pretty much defines the scope of the film, which follows the two man - who, at this stage, don't know one another.
One of them is a male nurse, who treats a girl he used to watch from his mother's apartment as she would train in ballet. She was involved in a car crash, and now in her fourth year of a coma. The other is a journalist who used to write travel books; he falls in love with a woman matador who gets rammed down by a raging bull and finds herself in a coma, too. Both men's ways collide again at the hospital, and from this point on the film observes the differences between these man - one talks to his woman and the other is rational and won't do it - and the differences their attitudes make. Effectively, this is a story about men's dependence on women and vice versa; yet another story about women, strong women, which are Almodovar's favorite subject.
The story developes extremely well, the characters are very well defined, and everything is very well orchestrated - there can be no doubt concerning Almodovar's qualities as a director. It is a pleasure to watch.
And talking about pleasures of watching, we are not denied our pound of flesh in this one, either. Naked skin is visible throughout the film, yet it is not a pornographic experience the way American films that expose the usually unexposed bits of flesh manage such affairs; it is more at the erotic level of things.
All in all, after watching a film like Talk to Her, I cannot avoid thinking that maybe I should give Spanish and French films more of a go. Sadly, you don't hear much of these films, making them rather hard to find at the video rental store; that's a pity, because there are bound to be others of Almodovar's quality out there.
Best scene: I liked the ending scene the most. Problem is, I can't tell what's in there without spoiling it, so I'll just say that I really liked the shots' composition as it follows the various characters watching a ballet, this closing the circle that started with the opening scene.
Picture quality: Lacking detail with digital artifacts aplenty and a low bit rate. There are also white lines at the very top and very bottom of the picture, pointing towards a rather shoddy transfer job.
Sound quality: Like the rest of the film it is rather subtle, but it fits the film. The musical soundtrack is just great, and it is also very well mixed to stir the emotions. The kind of a soundtrack that makes you go "wow".
Overall: A pleasure - 4 stars.
Posted by Moshe Reuveni at 11/12/2006 10:11:00 pm
Email ThisBlogThis!Share to TwitterShare to FacebookShare to Pinterest
Labels: Film