DVD: The Squid and the Whale 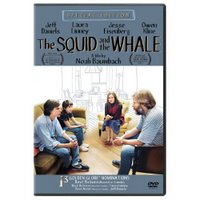 Lowdown: A divorce in your family can really mess you up. Or: Together we stand, divided we fall.
Review:
The Squid and the Whale is a rather unique film in the sense of that it handles only one issue, it doesn't really get anywhere with that one issue, and it does not attempt to act as some sophisticated metaphoric message convener the way most films do. Luckily, this just-a-bit-more-than-70-minutes film manages its single topic quite effectively.
And the topic is fairly simple, although not simple at all for those involved: the film follows a family of four as it goes through a separation/divorce. Jeff Daniels and Laura Linney are the parents, whose story we start being involved in at a fairly advanced stage of antagonism. Their two kids, one in his high teens and the other in the low teens camp with their favorite parent once the news of an upcoming divorce is broken to them, and we continue following the story and learning what has transpired before the current time-line mainly through the eyes of the older son.
The film really goes into the details of what happens to each character. The wife messing with other lovers, the husband jealously going at it with a young student, and the younger son becoming an alcohol consuming rebel.
The most interesting part belongs to the older son, who also provides the film's main weakness: He claims to have written Pink Floyd's "Hey You" song (taken from the album The Wall), and reaps some rewards for that. Personally, I have a problem with so many Brooklyners - the story takes place in New York - not being able to identify a famous song from a very famous album. We also see the child looking for guidance from his father but failing to get it, and becoming jealous when his father hits it our with a young student.
All in all, we see that the divorce really messes everyone up. We see how, but we don't see much more than that.
Best scene: The older son regrets leaving his girlfriend after following his father's advice, and stalks her while she's at a restaurant with her family. Quite a revealing scene.
Picture quality: The film is shot hand held at what seems to be like truly authentic settings. As a result, the picture is very grainy and overall the DVD format's capabilities eclipses what the film requires. This does provide for quite a specific look which matches the film's atmosphere, though. That said, everything is washed with a red hue; I doubt that is intentional (it could be the result of using in room incandescent lighting).
Sound quality: Again, production values don't reign high here; it's mostly to do with realism. But if you take that into account, the sound is not bad for what it is asked to do.
Overall: A solid 3 star performer.
Posted by Moshe Reuveni at 11/25/2006 06:31:00 pm
Email ThisBlogThis!Share to TwitterShare to FacebookShare to Pinterest
Labels: Film