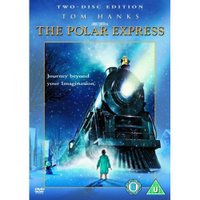 Lowdown: Christmas can turn into a collection of mildly entertaining adventures in 3D if you just believe.
Review:
Robert Zemeckis has made a few good films in his time. Back to the Future, Forrest Gump, Cast Away. Even Contact.
So I was quite looking forward to seeing his ventures into the field of computer animation, even if it is about a subject foreign to me as Christmas; hopefully, Tom Hanks would even things out.
The film tells the story of a "doubter": a kid that has severe doubts about Christmas being the way it is told to be, Santa Claus and all. As if to address his doubts, he is visited by this huge steam train on the eve of Christmas, taking him to the north pole to meet the man himself.
On the way he meets Tom Hanks in a multitude of different variations, each of which is drawn a bit differently with a voiced that is somewhat more synthesized. Apparently, according to the DVD's supplementals, Tom Hanks acts most of the roles in the film while wearing these sensors, which later translate his movements into motion captured animation. Much like Gollum.
Further on his way the kid goes through a multitude of adventures that make very little sense but are supposed to be quite thrilling when watched the way the film was originally meant to be watched - a 3D IMAX presentation. However, even there I severely doubt those thrill rides would make any sense other than provide cheap excuses to stick things directly into the eye of the viewer.
Eventually, the kid learns that in order to get into the hang of things he must "believe". Once he starts believing he gets his Christmas gifts and overall becomes happier - all of his non existent "problems" are immediately solved.
I found the film to totally fail to deliver. It's a mix of the senseless plot and the crap motion capture - with all due respect to advanced technology and to computer graphics, most of the characters still feel as if they're operated by a transparent string.
But most of all, I found the film lacking simply because it is empty of any contents, and what contents it has is totally meaningless. The kid is told to believe, but believe in what? The bullshit piled on him by adults? I would much rather have an inquisitive child that ponders things than a child that accepts things the way he's told; I know I'll regret that statement if I get to have my own children, but I would still like to give their brains some credit.
But personal views concerning hereditary religion aside, the film simply doesn't tell you anything about the Christmas spirit, even if you are someone who celebrates it. You watch the film and you get the feeling that Christmas is all about Christmas presents, nothing more and nothing less. And that's a sad and empty way to look at it.
Best scene: The scenes involving the elves at the north pole; they're the most imaginative ones in the film.
Picture quality: Given the animation character of the film, it's hard to judge; overall, I would say picture quality is excellent.
Sound quality: Quite good, yet not top notch.
Overall: This is a pretty bad film. 1.5 stars? 1 star? Does it really matter?
Posted by Moshe Reuveni at 11/08/2006 09:15:00 pm
Email ThisBlogThis!Share to TwitterShare to FacebookShare to Pinterest
Labels: Film

interesting. from Eastwood, i've only seen Mystic River (which i loved) and Million Dollar Baby (which i didn't). i do enjoy that Eastwood doesn't feel he needs to use a lot of camera tricks or CG to wow you, that he can just present a story straight up. but if it's just a retread of Saving Private Ryan, i can't help but think it's at least a good retread. after all, can Eastwood really do a bad movie?

btw, thanks for supporting They Might Be Critics! it's good to have friends.

I don't know, I was quite disappointed with Flags. It's not that it's a bad film - it's a good one; it's just that I expect much more from Eastwood.
Personally, I suspect there was a lot of CG in the various battle scenes. They wouldn't get all those ships and all the soldiers otherwise without a budget similar to the Iraq war.