DVD: March of the Penguins 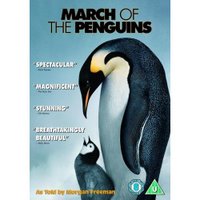 Lowdown: A year in the life of a penguin can be such a schmaltzy affair, according to Morgan Freeman.
Review:
March of the Penguins is obviously marketed at kids. That is made obvious by the avalanche of kids' film teasers when you just load the DVD into the player (need I express my opinion on that?), but it is also evident by the text coming out of Morgan Freeman's mouth when he narrates the action.
The story of this French documentary is pretty simple: It follows the life of a group of emperor penguins living in through a year of their lives, representing a full circle of life. It starts in a journey to an area where they mate and raise their baby penguins, and it ends when the cubs leave home. In between, it follows the torments bestowed upon the penguins, from the cold of winter through predators and the long marches in the cold after which the film is named.
It's all pretty straight forward natural documentary stuff. The twist here is Morgan Freeman's text, which attempts to humanize everything the penguins do, translating it all to terms like "love" and "grief".
It all works so smoothly that you can understand why the main fuss with the film had not much to do with penguins but rather with the way supporters of that legend called "intelligent design" tried to use the film as a tool to advance their propaganda. Personally, I see no signs for anything other than evolution in the film, but more to the point I was mainly restraining myself from puking at Freeman's comments. Yes, there are human like elements to the way penguins behave; but do I really need to have these shoved up my ears? Can't I just think of them on my own?
The film also appears overly sanitized. You don't see shit and pee, nor any blood. These penguins can, apparently, live for a year without going to the toilet.
Yes, I realize that I'm older than the film's target audience; but I think even they could do with some subtlety of the type that comes with realism. People, even young ones, can think; they're not penguins. Bring on David Attenborough.
Best scene: Forget about the feature film itself; a National Geographic documentary in the DVD's special features is just hilarious. They fit this "crittercam" unto an innocent penguin, making it look like the James Bond of penguins; and their commentary sounds like Die Hard 4, with comments like "the seal makes it check-mate for this emperor" and "this time it's personal" (actually, that wasn't said, but that's probably the only film like cliche that wasn't used by this so crappy it's stupidly funny documentary).
Picture quality: Well, I didn't expect elaborate lighting crews to accompany the crew in , but this is no excuse for plenty of digital artifacts.
Sound quality: The dubbing is pretty bad. The music is nice, and provides some nice yet shallow envelopment with a bit of low frequency action.
Overall: 2.5 stars due to the insulting commentary. The shots were great; the romantic spouting accompanying them were pretty bad.
Posted by Moshe Reuveni at 11/06/2006 10:09:00 pm
Email ThisBlogThis!Share to TwitterShare to FacebookShare to Pinterest
Labels: Film