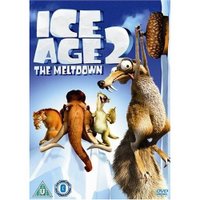 Lowdown: Global warming was having an effect on life at the end of an ice age, too.
Review:
Sequels. You know they are going to be bad, you didn't really like the original to begin with, yet you almost always give them a chance. Why? Don't ask me, because after watching Ice Age 2 I strongly suspect I have some severe masochistic tendencies.
The story of this computer animation film, if you can refer to it as a story, follows the same three characters from the original: a sloth, a mammoth and a saber tooth tiger all living it out at the end of an ice age. It's almost needless to say that before you actually get to the thin story you have to watch several teasers telling you all about everything you didn't want to know about the other lovely films the studio wants you to buy. But anyway, if you survived the teasers, you will get to those lovely characters as they live it out with lots of other prehistoric animals in peace and harmony - a sort of a garden of eden, you can argue.
Trouble is at the doorstep, though, as global warming causes ice to melt and the garden of eden to flood. Our animals have to seek shelter elsewhere, and so begins a short journey to a new haven. And in this journey they meet other characters, none of which are well developed and most of which exhibit severe symptoms of contemporary pop culture; amongst which they meet a female mammoth which falls into the square of the romantic tension maker.
It's all extremely shallow, and none of the characters - including the three leading ones - are developed to any sort of a degree. The plot, whatever might exist of it, is thin and meaningless, and as the film progresses you're mainly left to wonder why you decided to waste an hour and a half of your life watching such a bad film.
I find it interesting to note the film had a few biblical connotations. I already mentioned a garden of eden, but it also has a Noah's ark and a postmortem heaven. As far as I can tell, none of those actually lead us anywhere - a fairly similar status to where the global warming motif leads the film, too. The only thing you're left with is a thin story about friendship.
Best scene: Forget the main characters, the real hero is the weird squirrel who madly hunts an elusive acorn, forming the transition scenes to the main story. His best appearance, though, is not in the film at all but rather in one of the supplementals, which tells a short story about the squirrel and a time machine in the shape of an acorn.
Picture quality: Surprisingly enough it's quite mediocre, with plenty of digital artifacts and noise.
Sound quality: OK, but not much better than the minimum you would expect from an American production whose main quality is in its production values.
Overall: A keep away from 1 star.
Posted by Moshe Reuveni at 11/23/2006 11:04:00 pm
Email ThisBlogThis!Share to TwitterShare to FacebookShare to Pinterest
Labels: Film

I actually thought this movie was pretty good. It's a nice movie to see with the family. It has some funny parts and I thought the theme of the story was very well written. Ice Age: The Meltdown is a nominee for favorite family movie for The People's Choice Awards! It's up against Over The Hedge and Cars.You can vote for at http://www.pcavote.com . I work with The People's Choice Community, so I'm giving you guys the heads up! You can also enter to win a free VIP trip to Hollywood to attend the awards and afterparty!

Alas, the contest is only open to "legal residents of the US".