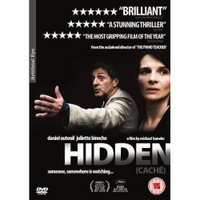 Lowdown: Relationships break down when a couple keeps on receiving surveillance videos of their own house.
Review:
To continue the trend of foreign (as in not Hollywood made) films, here is yet another one. I would call it a European film, as it's directed by a German and features French actors speaking Froggish. And it's definitely not a straight French film, as it features no nudity or sexuality at all; that said, it's a very good, effective and unique thriller.
The story follows a French couple, portrayed by Daniel Auteuil and Juliette Binoche. They keep on receiving surveillance videos of their own house at their doorstep, and they have no idea who is behind it and why. The police would not talk to them unless something really nasty happens, leading them to just become more and more frustrated. Nerves start showing up in their professional careers, relationships with one another and with friends, as well as with the raising of their teenage son.
Eventually we begin to suspect that this is all to do with some dark event from Daniel Auteuil's past. Slowly, as the film progresses, we learn more about that, but the film becomes quite disturbing as it goes along without answering our questions. In this regard, the film is quite unique: It is not a happy end film, nor a film that closes the loop on the events taking place in it. In fact, it is quite a disturbing film: Auteuil's character, for example, is not one you would identify with, despite the fact it is leading the film; he makes some weird choices. Instead of the normal way lead characters are developed, Auteuil's one is made into a tragic character.
The film drives us to see how, by not communicating with one another and by being selfish, we ruin ourselves and those around us: examples start from family relationships that break down, but it is also clear the director wants us to view the way the West treats the Middle East (in the film's case, the way the French treat Algerians). Basically, he's saying that our selfishness and our lack of will to really share this world with those that have slightly dissimilar faiths to ours and slightly darker skins than ours does not only hurt them, but us as well. We turn into monsters. We turn into tragic characters. Personally, as an ex-Israeli that spent four years in the West Bank, I'm with the director with this one.
Meanings and metaphors aside, the film is truly unique in the way it is made. It is utterly realistic: there are no sound effects, no special effects, no music, nothing artificial. Everything is made to look and feel exactly the way it would in real life.
The film is also quite brave: There are several long scenes where we just watch a house from the outside for several minutes without much happening. While this is an easy way to lose the crowd's attentions, those willing to give their attention to the film are greatly rewarded. So while it's not for the short attention spanned the film really delivers for the viewer that is willing to invest when it comes to experiencing something new and authentic.
Personally, I enjoyed the film a lot for another reason, one that may sound too mundane: I liked the French-ness of the film, that window it provides us into the way the French live their lives. You see cars parked only centimeters away from one another, which - while very common in France - is actually illegal in Australia; even in Israel such tight parking would not be accepted. You see people closing the door behind them when they enter their living room, whereas both in Israel and in Australia the living room tends to be of the "open floor plan" type. And you also see the ritual that is the French dinner, with small servings designed to look well and the people actually sitting at the table instead of eating in front of the TV.
There is a lot to observe from this film. It's just happens to be an effective thriller, too.
Best scene: I don't know if "best scene" is the way to describe it, but the long scenes in which we see the street or a schoolyard without any significant activities taking place are quite unique.
Picture quality: Digital artifacts lead me to conclude not enough bandwidth was allocated to the picture here. Some dark scenes are quite grainy and noisy, but that has a lot to do with the artistic choice of making the film look realistic.
Sound quality: As mentioned, the sound is quite realistic. Don't expect heavy surround action, because most of the film is in the dialog and the acting. That said, the sound that is there is quite supportive to the way the film feels.
Overall: The best way to describe this one is with the word "unique". 4 stars.
Posted by Moshe Reuveni at 11/15/2006 03:10:00 pm
Email ThisBlogThis!Share to TwitterShare to FacebookShare to Pinterest
Labels: Film