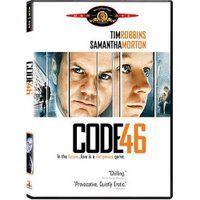 Lowdown: A milder Blade Runner.
Review:
When people ask me what I think is the best film ever, I usually answer Blade Runner. There are films I liked more - Lord of the Rings, even Terminator II - but Blade Runner is usually the best (I say "usually" because it's a very subjective call that depends on all sorts of things, mood included).
Most people consider Blade Runner to be great film because of its vision of the future. However, I feel that Blade Runner's ultimate greatness stems from the way it handles a very deep question which is at the heart of our cultures: what makes a human humane? Religion thinks it supplies us the answer on that, but it seems Ridley Scott is in a bit of a disagreement there, saying that ultimately machines can be just as human as us, and thus telling us a bit about ourselves.
Code 46 is a lot like Blade Runner: it portrays a future that is near enough to where we currently are, enabling us to identify with it; yet its future is also a scary future. Genetics has progressed so that people can be controlled through viruses, and most people are conceived artificially; People are tracked wherever they go through their insurance cards, and those that cannot afford insurance are cast to the "outside" world where their existence is in great doubt; And globalization has become dominant enough so that you get people from all over the world all over the world, and language is a mix of English, Spanish and Arabic.
However, where Code 46 fails is in using this vision of the future to discuss a coherent philosophical issue. The film basically settles for a bleak and scary vision of the future, one that would make us all scared and wonder where this world of ours is heading for - especially as all the nasty stuff going on in the future is heavily based on current trends - but aside of giving us this vision of a bleak future it doesn't do much more. One could argue, though, that such an achievement is enough on its own; that helping us to stop and think about, say, how the war on terror is serving in the shutting of our mouths through the various anti libertarian legislation and free speech limitations now being imposed in both the USA and Australia is worth the time spent watching the film. I tend to disagree, though, simply because as a movie, Code 46 is not that exciting; in fact, it is often boring despite being on the shorter side of things.
The story follows Tim Robins, an expert mind reader who uses dedicated viruses for insurance related investigations. Robins is sent to China to investigate an insurance fraud. He quickly finds the culprit but also quickly falls in love with her, which is when the real story begins. Directed by Michael Winterbottom, a director not unfamiliar with controversy - 9 Songs and The Road to Guantanamo spring into mind - the film is quite unique in its look and feel. It is obvious this is not an American film. However, this is just not enough to create an exhilarating film; its vision of the future is not a wide enough basis to have an entire film established upon.
Best scene: Robins visits the hospital where his lover is in, only to find the full extent of what genetic engineering and playing with memories can do.
Picture quality: The picture has a distinct washed / high contrast look which was obviously meant to go along with the bleak vision of the future. So while it is significantly less than optimal, it is probably exactly what the director wanted. That aside, the picture is very good with no noticeable distortion.
Sound quality: Pretty average, with some nicely mixed music.
Overall: I was disappointed. 2 stars.
Posted by Moshe Reuveni at 11/25/2006 09:08:00 pm
Email ThisBlogThis!Share to TwitterShare to FacebookShare to Pinterest
Labels: Film