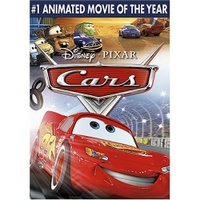 Lowdown: A car finds that there are more important things in life than fame and fortune; status anxiety for cars.
Review:
Only one preview attacks you when you load Cars into your DVD player, which is quite admirable for a kids' film. However, there's no doubt the latest computer animation film from the house of Pixar is a kid's film, or rather - a film that aims at people with limited capacity to digest a film.
The film follows the adventures of a sexy racing car, voiced by Owen Wilson. In a world where the entire population is made of cars, Wilson is a hot shot rookie who thinks only of himself and his quest to get laid, become rich, and enjoy the privileges of those who hold high status in modern day society.
After Wilson and two other cars end up tied for the title at the end of the NASCAR season, the race organizers declare a tie-break round to take place in California within a week. Wilson is put in a truck and driven to California, but his arrogance costs him to be dropped of the truck and get lost. Instead of going on the interstate he finds himself in a remote small town, somewhere in the middle of the famous Route 66.
Wilson becomes more and more desperate to get to California and fulfill his dream; he causes a big mess in town (in a very cartoon like way), and in turn is sentenced to fix the town's road - something that would take him about a week. He tries to escape, then tries to do a quick job at fixing the road, but both don't really work. Alas, he has to serve his sentence by making a true effort. He does, it works, and in the process he befriends the town's locals - a bunch of unlikely cars if ever one encountered such. In short, he learns there's more to life than expensive cars. But then his former life catches up with him...
For the record, in case you're not a regular reader of my posts, what the film is trying to tell us - that friendship is probably the most important thing in life, the only thing that can really lead to a fulfilling life; that quality can be found in the most unlikely of places; and that the harder things in life are usually the worthier things in life - are all things I truly appreciate and advocate for. That's good. There are also some nice touches to the film, in typical Pixar style: imaginative characters, as well as imaginative casting (e.g., Paul Newman - an ex racing car team owner himself, giving his voice to an old racing car who ends up managing a racing team).
However, with all due credit, the message is delivered in a very unsubtle way - it's all spoon fed to you, just in case you don't have the intelligence to figure things out. Everything is simple, everything follows all the formulas that previous film and cultural stuff have established way long ago. And the perfect example is the happy end, where - be careful, a spoiler is coming up - people learn the virtues of the long road over the interstates, and Route 66 becomes alive again.
Best scene: Be careful again, here's another spoiler. Wilson's "hideout" in Route 66 is disclosed to the press, who circle him and end up pushing up back on the truck that takes him to California against his will. I liked the scene because it portrayed, to me, the way in which society pushes us all to conform with its values - be they right or wrong. Watching the scene made me hail Bohemia.
Picture quality: In one word - exemplary.
Sound quality: Wow! Directional dialog and effects, low frequency information in the surrounds - this one is a case of "who can ask for anything more".
Overall: As a film, this is something like 2.5 stars. However, given the technical excellence of the presentation and the appreciation I have for what it is trying to say, I'm giving it 3.5 stars.
Posted by Moshe Reuveni at 11/21/2006 10:03:00 pm
Email ThisBlogThis!Share to TwitterShare to FacebookShare to Pinterest
Labels: Film

It’s exactly like Doc Hollywood, except animated. And as far as Yoav is concerned, the worst Pixar yet (not that he didn’t like it).

I would say Nemo was the worst Pixar ever, but from what I've heard from "the community" so far, Yoav is on the majority side.

Nemo was good. I liked it better than the Toy Stor[y/ies]. Didn't you like Dori?

I don't remember much about who's who in Nemo. I didn't like the fish with amnesia, if that is Dori: It was annoyingly cheap humor. In general I found Nemo to severely lack in adult appeal compared to the other Pixars.