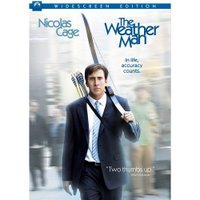 Lowdown: Nicolas Cage thinks he has the easiest life around with the easiest job around only to discover that life is not that easy.
Review:
Why is it that so many Nicholas Cage films feature a commentator (Cage) acting as an anchor point to the film? Could it be that this is an easy way to push the film ahead? Well, in the case of Weather Man, "easy" is the key theme of the film.
Cage has the easiest job possible: He works as a weather man for two hours a day, presenting Chicago weather on TV. He earns a lot of money doing this even if he doesn't know much about meteorology. But as easy as life may be on Cage, things in his life are not going his way: his wife left him and is now with another man; his daughter steals his money to buy cigarettes; his son seems to become a delinquent; his father, portrayed by Michael Caine, is about to die of cancer; people keep throwing fast food on him; and Chicago's weather sucks big time.
With all these things taking place, the film shows how Cage is slowly coming to grips with the fact he cannot just let life pass by him expecting everything to go his way the way his weather forecasting job is. He needs to make an effort, and slowly he does; the question is, will he be too late to save most of the things that really mattered?
The film is obviously trying to tell us that with the chase for fame, glory and cash leading the way, modern life has lost the plot on what is really important with our lives: first and foremost, our families. Director Gore Verbinski, of Pirates of the Caribbean fame, is trying to tell us that we should stand with them and even get our knuckles dirty fighting for them. And most of all, we should not lose the plot and succumb to the routine of working hard for the sake of achieving something that is way too lucid.
While the film's statement makes sense, the presentation doesn't. Not that it's bad, but it crosses the line into being overly preachy; besides, what's with commending violence as a positive thing when it comes to looking after your family? That's a no no in my book.
The film does create an atmosphere that sort of grows on you throughout its development, but I found the sudden ending to be a bit hard to accept as real. It's one of those endings where suddenly what didn't work before is finally working, and it doesn't really make sense.
Best scene: Cage gives an account of how his daughter persevered through less than one archery lessons after she chose archery as something she'd like to go into.
Picture quality: Colors are good, but there is such an abundance of digital artifacts you end up playing "spot the mosquito noise".
Sound quality: Too tame to be of much good to the film.
Overall: Enjoyable to watch, albeit depressing. 2.5 stars.
Posted by Moshe Reuveni at 10/10/2006 11:16:00 pm
Email ThisBlogThis!Share to TwitterShare to FacebookShare to Pinterest
Labels: Film