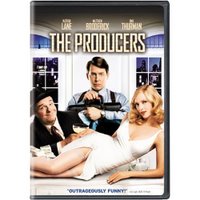 Lowdown: It's really hard to produce a Broadway flop.
Review:
Ok: I will make it very clear. I am pretty ignorant when it comes to The Producers. I know there were several different versions; I know it's a Mel Brooks thing; but only recently I have learnt that it's actually based on a play and not, originally, a movie; and only now that we watched it I learned that it's actually a musical.
And that's where I have a problem: I don't really like musicals. Call me what you want, but I find the concept of people suddenly bursting into overly choreographed mix of dancing and singing a rather artificial thing; I have been living for 35 years now and I never found myself bursting into such a fury of singing as they do in musicals. Add to that the fact that in most of the musicals the songs are not really on par with what you would like to see in the next Beatles album, and you'll understand why musicals are not my cup of water. I think the only musical film I would call "good" is Aladdin.
And with that introduction, let's see what the film is about. Nathan Lane, who is most famous as the voice of The Lion King's Timon, plays Bialik - a Broadway producer specializing in producing flops who gets the money for his next production by selling his body to New York's rich old ladies. One day he meets Matthew Broderick, an accountant, who notices that you can make more money through a flop if you cheat the people you get the money from as well as the IRS (the "how" for this cheat is rather thinly explained).
Together they then set out to produce the biggest flop Hollywood ever knew. They choose a script written by a mad Nazi, Will Ferrell, a gay director, and a Swedish actress (Uma Thurman) and go about producing a musical on Adolf Elizabeth Hitler. On the way to producing their show the producers lose every shred of conscience they ever had, which is what the film is really trying to tell us on what it takes to have financial success in this world of ours. I guess in this respect we are all producers, to one extent or another: we all sold our soul to the devil in order to make a buck; I don't think there is anyone out there, Pope included, that did not commit to an inferior cause or perform some obscene act. Watching The Producers makes you laugh, but a lot of this laughter is aimed at ourselves.
Talking about laughter - the film is quite funny, if less than plausible. Ferrell steals the show in a Looney Tunes like performance while Thurman is the one that delivers the goods as far as conventional acting is concerned. Theater like sets and the theater like style rule the day overall, so overall this feels more like a play that was shot for the cinema than a proper film; that said, you do get some grand sets that would not fit in a theater, some external shots, and you're always in the front row seat.
Best scene: Will Ferrell introduces the producers to Adolf, the chief of his carrier pigeons, and makes them take a Nazi oath.
Picture quality: Excellent! That said, there aren't any proper darkly lit scenes in this film, which is where the problems usually show up.
Sound quality: Effects and dialog are pretty limited, but the music is well spread throughout the channels for a nice surround effect.
Overall: Funny, yes, but I wasn't made for musicals. 3 stars.
Posted by Moshe Reuveni at 10/15/2006 10:51:00 am
Email ThisBlogThis!Share to TwitterShare to FacebookShare to Pinterest
Labels: Film