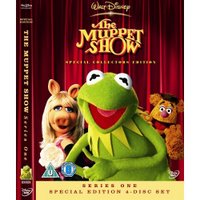 Lowdown: The Muppets' innocent fun stands the test of time.
Review:
The Muppet Show was one of the foundations of my childhood. I used to anxiously wait for Friday evenings at five, when this group of human like behaving animal puppets would their version of a talk show. At the time I was too young to either understand the spoken English or read the Hebrew subtitles, yet I still liked it and watched it with religious passion. And it was even broadcast in black and white.
I haven't really kept in touch with the Muppets over the years. I did watch a movie of theirs on TV from time to time, but these were - generally speaking - quite disappointing and obviously aimed at children.
So how does the first season of that legendary TV program fare now, in the twenty first century, more than thirty years after it was originally broadcasted?
Well, it does very well, thank you very much. The thing that is immediately noticeable is that the jokes and the shows have withstood the test of time. You watch the shows and you don't think for even one second that "this is old stuff"; it just works, even if it hasn't got any CGI special effects.
The type of material is not exactly of rocket science sophistication, so there is not much that can really go wrong; but where the Muppets really got it right is in having stuff that would appeal to kids but at the same time appeal to adults that are willing to be a bit foolish. This is not a DVD that would work only with those that have fond childhood memories of this TV program; it should work with anyone anywhere. And as far as children entertainment goes, I think this blows contemporary stuff out of the water: with its innocence and cleverness, this is what children should be watching - not Big Brother or other so called reality shows.
The one area where the show does show its age is with the guest stars appearing in each of the episodes. Of the 24 guest stars in the 24 episodes on this quadruple DVD, I could only identify 3; the rest were incognitos to me. Still, that hardly interfered with my enjoyment. What did interfere, a bit, was that after watching an episode after an episode you do get a tad tired of the formula; but that can be understood given the context: 24 episodes or 600 minutes are quite a lot by all accounts.
Best scene: The first scene of episode 1 - Mana Mana, starring Animal.
Picture quality: Well, to put it mildly, picture quality will not be the reason why you buy this DVD. For a start, it's not in widescreen. But that's the least of the problems, with the episodes looking as if they were remastered for the DVD format from someone's old VHS tapes.
Sound quality: The diagnosis is pretty similar to the one discussing picture quality...
Overall: 4 stars.
Posted by Moshe Reuveni at 10/24/2006 11:02:00 pm
Email ThisBlogThis!Share to TwitterShare to FacebookShare to Pinterest
Labels: Film, TV