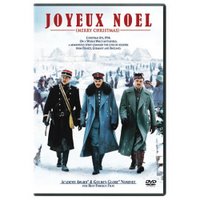 Lowdown: There's not much of a difference between the various parties fighting World War I.
Review:
Joyeux Noel is a European, primarily French, production dealing with events that really happened during the eve of Christmas 1914, when war came to a halt on certain sectors of the Western Front and both sides celebrated the holiday together. Before resuming the fight.
The film follows key figures from three sides thrown into the fight: A Scottish priest and two of his followers, a French officer disconnected from his wife who is in occupied land, and a German opera singer.
As of the word go, the film does its best to show us that despite the different language and contempt these various nations feel towards one another, the similarities between them far outweigh any differences they may have. Indeed, the film tries to work on three different layers: The first is the typical war movie theme of "we are all alike, so why are we killing one another", or "war- what is it good for". The second theme is the European Union theme - now that Europe is united, it tries to show that Europe should have been united ages ago and that the seeds for this unification were there even at the time when Europeans' favorite sport was the killing of fellow Europeans.
The third and the most interesting of the themes is the film's projection on contemporary events. By borrowing shamelessly from George Bush's famous "axis of evil" and "if you're not with us you're against us" speech, the film does its best to mock everything this speech stood on and to show that the current war against terror is not much different to the Great War. And just as everyone today will acknowledge that this war was a rather futile exercise in shedding blood, maybe the war on terror is just as fruitless; maybe, instead of fighting, we should strive to understand one another.
There are other interesting aspects to the film. For example, the German officer leading the trenched German side is Jewish; with everything that took place later between Germans and Jews, one tends to forget that lots of Jews fought on the German side during the pre-Hitler days.
Personally, I have several problems with the film. First, it portrays the Germans as humanists - even the film's French say they're treating occupied civilians humanely, when the history books I read portray quite a different picture (ask the Belgians for their version if you like). And I'm not even mentioning the reason why the war started in the first place, which most historians portray as the whim of a few Germans at the top to fulfill some weird dreams of theirs (while a minority of historians object to that view, there is no denying as to who started the actual fight).
So yes, I have a problem when in the name of European mateship truth is bent, a little. But I accept the fact that this film was made to make a point; it is not a documentary.
By far the worst problem of the film is that by dealing with several themes, it strays way too much for its own good. Lacking focus, it resorts to being to direct in delivering its message and ends up on the preachy side of things.
Still, with all the criticism, this is a fairly good war film.
Best scene: The Germans invite the Scots and the French to share their trenches with them prior to an upcoming German artillery shelling. The scene sets the tone for a truly united Europe.
Picture quality: Quite good, yet lacking in fine detail - probably due to relatively low bit rates.
Sound quality: Good, but not spectacular. The "going over the top" fight scene offers sound that truly makes you feel the terror of running towards machine guns.
Overall: 3.5 stars; I'm a sucker for World War I films.
Posted by Moshe Reuveni at 10/31/2006 11:18:00 pm
Email ThisBlogThis!Share to TwitterShare to FacebookShare to Pinterest
Labels: Film